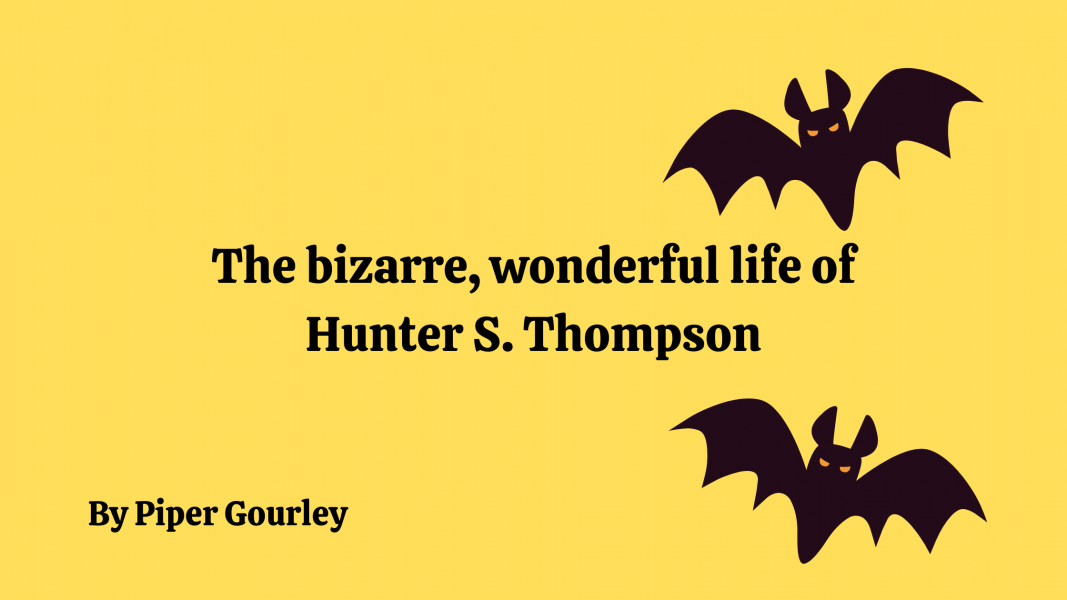 The godfather of gonzo journalism also happens to be one of the weirdest people who has ever walked the earth. Hunter S. Thompson didn’t only leave a mark on the literary and journalistic world, but on the world at large, becoming notorious for his famous antics beyond his publications. He owned a monkey with alcoholism, opened fire on his snooty neighbor’s mansion, wrote a scathing obituary for Nixon, turned a washing machine into a car, spent millions on illegal substances, almost drowned during a tropical storm, lit a famous yacht on fire, and joined a dangerous biker gang while writing ‘Hell’s Angels’ (1967)...and this is just scraping the surface. While every facet of his life was strange beyond comprehension, some events stand out more than others, becoming defining moments in Thompson’s public career. These are a few of the most bizarre moments from the life of journalism’s oddest writer, Hunter S. Thompson.

The time he ran for Sheriff

Thompson owned a permanent residence in Pitkin County, Colorado. In 1970, he decided to run for Sheriff there. Despite having no political experience, Thompson felt that he was up for the challenge. He ran under what he called the “Freak Power” ticket, meant to uplift the counter-culture kiddos of the 1960s. Thompson shaved his head completely so that he could refer to the incumbent Sheriff as his “long-haired opponent,” almost never using their real name. He announced that, if he were elected, he would cover the roads in grasses, get rid of highrises that blocked pleasant views of the colorado mountains, and would—in his greatest promise of all—rename Aspen “Fat City” to draw attention to those businesspeople ruining the local ecology.

Unsurprisingly, his entire campaign was propelled by his propensity for satire. He made numerous efforts to draw attention to the ways that local government is flawed and, at times, nothing more than a popularity contest. Although the election existed on a smaller scale, his whacky campaign drew attention across the country. A bomb threat was even taken out against the city by a group that promised to blow up Pitkin County if Thompson was elected.

In an article he wrote for Rolling Stone, “Freak Power in the Rockies,” Thompson said: “Why not challenge the establishment with a candidate they’ve never heard of? Who has never been primed or prepped or greased for public office? And whose lifestyle is already so weird that the idea of 'conversion' would never occur to him? In other words, why not run an honest freak and turn him loose, on their turf, to show up all the normal candidates for the worthless losers they are and always have been?”

Despite his favorable public persona, Thompson didn’t get to pull through with his promises. On election day, Thompson lost by a mere four points. After he lost, he reset his sights on running for the presidency, but this goal never took off.

The time he interviewed an agitated Keith Richards

In 1993, ABC commissioned Hunter S. Thompson to interview the legendary member of the Rolling Stones, Keith Richards. Unfortunately, at the last minute, the uber-rich rocker decided that he wanted more money to do the interview or he wouldn’t be talking to Thompson at all. Richards went so far as to lock himself in his dressing room so that no one could have access to him. While some publications may have agreed to the wish for an increased salary (it was Keith Richards, after all), Thompson was not happy with his sudden and blunt desire to ask for more cash. Instead of complying with Richards’ demands, Thompson decided to draw him out of his dressing room his own way. Thompson found a recording of a pig being slaughtered and began to blast it through a megaphone right outside of Richards’ door. Before long, the sound became unbearable, and Richards was forced to open up the door to tell Thompson to get lost. However, the second that he pried it open, Thompson began to conduct the interview, not missing a beat. He wasn’t one of the most successful journalists of the 20th century for nothing.

The time he blew off the world’s biggest fight

The boxing match between Muhammad Ali and George Foreman in 1974 was one of the most anticipated events of the century. Thompson, being a renowned journalist and favorite of Rolling Stone Magazine, was given the chance to attend and report on the fight, alongside writers George Plimpton and Norman Mailer. Although Rolling Stone paid for his plane ticket and journalist pass, this was small potatoes to him. He didn’t see two men fighting as real journalistic fodder. He ended up handing off his ticket and spent the night wandering through the wilderness of Central Africa, self-reportedly searching for pygmies and wanted Nazis. He also found and purchased ivory under the guise of being the doctor of the legendary George Foreman, because why not? When he returned from his trip late in the night, he drank heavily until he passed out in his hotel room. Upon waking, he didn’t even know who won the fight that he was supposed to be writing about. Fortunately, Plimpton and Mailer got him up to speed. On the way back to the states, his ivory was confiscated. Instead of paying the fees, he grabbed his ivory and scaled the service desk, making a break for the nearest exit.

Thanks to his positionality in the entertainment industry,Thompson was close friends with a number of famous actors. Johnny Depp, who starred in the film adaptations of ‘Fear and Loathing in Las Vegas’ (1971) and ‘The Rum Diary’ (1998), was super dear to Thompson. He almost died in Thompson’s basement full of dynamite (for “making bombs”, according to Thompson). This was also true of Bill Murray, who nearly died under Thompson’s watch when he duct-taped him to a chair and threw him in a pool to stimulate Houdini’s escape from water, despite using highly-restrictive tape rather than rope. All his celebrity friends knew he was a prankster (and more dangerous than the average person), yet Jack Nicholson may have gotten the worst run at his sanity from Thompson.

Thompson and Nicholson lived near one another in Pitkin County, Colorado. Nicholson was a casual victim of Thompson’s trickery, so most pranks didn’t surprise him. Still, on one of Nicholson’s birthdays in the 1980s, Thompson decided to go all out with his best trick yet. He hiked out to the ridge closest to Nicholson’s house and used a horrifyingly large speaker to play the sounds of animals dying, as well as shining a massive spotlight right at Nicholson’s door and firing off a 40-million-candlepower parachute flare over his house. Nicholson, fearing for the safety of himself and his family, locked himself in his basement and called the F.B.I. to come to rescue them. However, when he opened his front door and saw an elk heart stabbed into the porch, he realized exactly who was behind the racket. If a dead animal heart is one of your signatures, you know you’ve got a personality.

The time he exploded at his own funeral

Before Thompson took his life in 2005, he wanted to make sure that his funeral would be just as bizarre and exciting as his life. For his ultimate final message, he decided to make sure that he would go out with a bang...literally. Rather than leaving behind instructions for a nice burial, he demanded that his widow fire his ashes out of a canon. She didn’t question this request, later telling E.S.P.N., “He loved explosions.” Along with many of Thompson’s close friends, she followed through with his wishes, including adding in fireworks to make his send-off sparkle. And what would a fireworks show be without a good soundtrack? Norman Greenbaum’s “Spirit in the Sky” and Bob Dylan’s “Mr. Tambourine Man” played in the background while the prismatic collection of fireworks were discharged. While his family and friends mourned his loss for years, he made sure that his funeral was a celebration of his strange life, his many friendships, and his deep love for blowing stuff up.