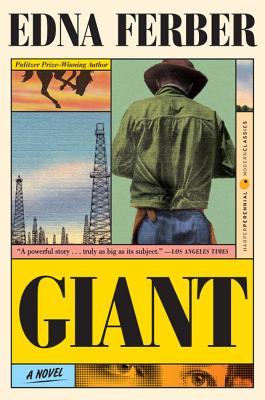 The basis for the classic film starring James Dean, Elizabeth Taylor, and Rock Hudson, Giant is Pulitzer Prize-winning author Edna Ferber's sweeping generational tale of power, love, cattle barons, and oil tycoons, set in Texas during the first half of the twentieth century.

When larger-than-life cattle rancher Jordan "Bick" Benedict arrives at the family home of sharp-witted but genteel Virginia socialite Leslie Lynnton to purchase a racehorse, the two are instantly drawn to each other. But for Leslie, falling in love with a Texan was a lot simpler than falling in love with Texas. Upon their arrival at Bick's ranch, Leslie is confronted not only with the oppressive heat and vastness of Texas but also by the disturbing inequity between runaway riches and the poverty and racism suffered by the Mexican workers on the ranch. Leslie and Bick's loving union endures against all odds, but a reckoning is coming and a price will have to be paid.

A sensational and enthralling saga, Ferber masterfully captures the essence of Texas with all its wealth and excess, cruelty and prejudice, pride and violence.

Born in Kalamazoo, Michigan, Edna Ferber (1885-1968) was a novelist, short-story writer, and playwright whose work served as the inspiration for numerous Broadway plays and Hollywood films, including Show Boat, Cimarron, Giant, Saratoga Trunk, and Ice Palace. She co-wrote the plays The Royal Family, Dinner at Eight, and Stage Door with George S. Kaufman and was awarded the Pulitzer Prize for her novel So Big.

“A powerful novel and a gripping read, and very much ahead of its time regarding South Texas race relations. It has charm and intelligence and swagger, and even some fairly profound sociological insight.”
— Texas Observer

“Her vocabulary is rich and vital; she sees material objects with a penetrating and delightful vision.”
— New York Tribune

“Giant makes marvelous reading—wealth piled on wealth, wonder on wonder in a stunning, splendiferous pyramid of ostentation….no one can deny the explosive impact of this story.”
— New York Times

“A powerful story...truly as big as its subject.”
— Los Angeles Times

“A powerful novel and a gripping read, and very much ahead of its time regarding South Texas race relations.”
— Texas Observer