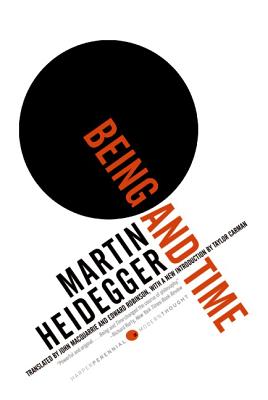 "What is the meaning of being?" This is the central question of Martin Heidegger's profoundly important work, in which the great philosopher seeks to explain the basic problems of existence. This first paperback edition of John Macquarrie and Edward Robinson's definitive translation also features a foreword by Heidegger scholar Taylor Carman.

A central influence on later philosophy, literature, art, and criticism—as well as existentialism and much of postmodern thought—Being and Time forever changed the intellectual map of the modern world. As Richard Rorty wrote in the New York Times Book Review, "You cannot read most of the important thinkers of recent times without taking Heidegger's thought into account."

Martin Heidegger (1889-1976) was born in Baden-Württemberg, Germany. He studied at the University of Freiburg and became a professor at the University of Marburg in 1932. After publishing his his magnum opus, Being and Time (1927), he returned to Freiburg to assume the chair of philosophy upon Husserl's retirement.