The Crown of Embers (Girl of Fire and Thorns #2) (Paperback) 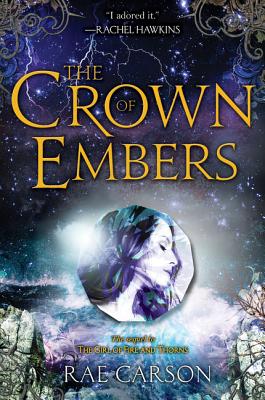 By Rae Carson
$10.99
This book is out of stock and awaiting a reprint. Please check back later for availability changes.

This is book number 2 in the Girl of Fire and Thorns series.

“Carson joins the ranks of writers like Kristin Cashore, Megan Whalen Turner, and Tamora Pierce as one of YA’s best writers of high fantasy.”—Locus Magazine

She does not know what awaits her at the enemy’s gate.

Elisa led her people to victory over a terrifying, sorcerous army. Her place as queen should be secure. But it isn’t. Her enemies come at her like ghosts in a dream, from foreign realms and even from within her own court. And her destiny as the chosen one remains uncertain.

To conquer the power she bears, Elisa must journey from the hidden catacombs beneath her own city to treacherous seas and a long-forgotten island. With her go a one-eyed spy, a traitor, and the man with whom—despite everything—she is falling in love. If she’s lucky, she’ll return. But there will be a cost.

Don’t miss The Empire of Dreams, Rae Carson’s action-packed return to the world of The Girl of Fire and Thorns!

Rae Carson is the author of two bestselling and award-winning trilogies. Her debut, The Girl of Fire and Thorns, was named a William C. Morris Award finalist and an Andre Norton Award finalist. Walk on Earth a Stranger was longlisted for the 2015 National Book Award and won the Western Writers of America Spur Award. Her books tend to contain adventure, magic, and smart girls who make (mostly) smart choices. Originally from California, Rae Carson now lives in Arizona with her husband. www.raecarson.com

“There are books you like, and books you love, and then there are the ones that make you go past ‘love’ and straight into, ‘I think I may need to marry this book.’ The Crown of Embers was that type of book for me. I adored it.”
— Rachel Hawkins, author of the New York Times bestselling Hex Hall series

“Rae Carson has proved she’s a master and has shaken up the YA genre. . . . Nothing is held back.”
— USA Today

Praise for The Girl of Fire and Thorns: “Fans of Tamora Pierce’s “Beka Cooper” series will find a kindred spirit in Elisa as she experiences great adversity and heart-wrenching loss.”
— School Library Journal (starred review)