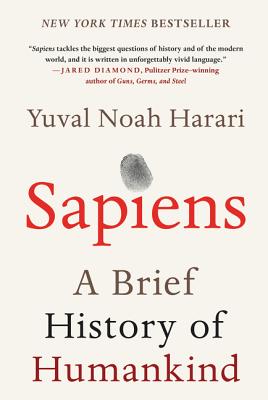 From a renowned historian comes a groundbreaking narrative of humanity’s creation and evolution—a #1 international bestseller—that explores the ways in which biology and history have defined us and enhanced our understanding of what it means to be “human.”

One hundred thousand years ago, at least six different species of humans inhabited Earth. Yet today there is only one—homo sapiens. What happened to the others? And what may happen to us?

Most books about the history of humanity pursue either a historical or a biological approach, but Dr. Yuval Noah Harari breaks the mold with this highly original book that begins about 70,000 years ago with the appearance of modern cognition. From examining the role evolving humans have played in the global ecosystem to charting the rise of empires, Sapiens integrates history and science to reconsider accepted narratives, connect past developments with contemporary concerns, and examine specific events within the context of larger ideas.

Dr. Harari also compels us to look ahead, because over the last few decades humans have begun to bend laws of natural selection that have governed life for the past four billion years. We are acquiring the ability to design not only the world around us, but also ourselves. Where is this leading us, and what do we want to become?

Featuring 27 photographs, 6 maps, and 25 illustrations/diagrams, this provocative and insightful work is sure to spark debate and is essential reading for aficionados of Jared Diamond, James Gleick, Matt Ridley, Robert Wright, and Sharon Moalem.

Prof. Yuval Noah Harari is a historian, philosopher, and the bestselling author of Sapiens: A Brief History of Humankind, Homo Deus: A Brief History of Tomorrow, 21 Lessons for the 21st Century, and Sapiens: A Graphic History. His books have sold over 35 million copies in 65 languages, and he is considered one of the world’s most influential public intellectuals today. The Guardian has credited Sapiens with revolutionizing the non-fiction market and popularizing “brainy books”.

In 2020 Harari joined forces with renowned comics artists David Vandermeulen and Daniel Casanave, to create Sapiens: A Graphic History: a radical adaptation of the original Sapiens into a graphic novel series. This illustrated collection casts Yuval Noah Harari in the role of guide, who takes the reader through the entire history of the human species, accompanied by a range of fictional characters and traveling through time, space and popular culture references.

Born in Haifa, Israel, in 1976, Harari received his PhD from the University of Oxford in 2002, and is currently a lecturer at the Department of History, the Hebrew University of Jerusalem. He originally specialized in world history, medieval history and military history, and his current research focuses on macro-historical questions such as: What is the relationship between history and biology? What is the essential difference between Homo sapiens and other animals? Is there justice in history? Does history have a direction? Did people become happier as history unfolded? What ethical questions do science and technology raise in the 21st century?

“Sapiens tackles the biggest questions of history and of the modern world, and it is written in unforgettably vivid language.” — Jared Diamond, Pulitzer Prize-winning author of Guns, Germs, and Steel, Collapse, and The World until Yesterday

“In Sapiens, Harari delves deep into our history as a species to help us understand who we are and what made us this way. An engrossing read.” — Dan Ariely, New York Times Bestselling author of Predictably Irrational, The Upside of Irrationality, and The Honest Truth About Dishonesty

“Yuval Noah Harari’s celebrated Sapiens does for human evolution what Stephen Hawking’s A Brief History of Time did for physics.… He does a superb job of outlining our slow emergence and eventual domination of the planet.” — Forbes

“Ambitious and illuminating …the wonderful and terrifying saga of the human species on earth.” — Christian Science Monitor

“[I]nteresting and provocative…It gives you a sense of perspective on how briefly we’ve been on this earth, how short things like agriculture and science have been around, and why it makes sense for us to not take them for granted.” — President Barack Obama

“I would recommend this book to anyone interested in a fun, engaging look at early human history…you’ll have a hard time putting it down.” — Bill Gates

“Yuval Noah Harari is an emerging rock-star lecturer at the nexus of history and science…. Sapiens takes readers on a sweeping tour of the history of our species…. Harari’s formidable intellect sheds light on the biggest breakthroughs in the human story…important reading for serious-minded, self-reflective sapiens.” — Washington Post

“It is one of the best accounts by a Homo sapiens of the unlikely story of our violent, accomplished species.…It is one hell of a story. And it has seldom been told better…. Compulsively readable and impossibly learned.” — Michael Gerson, Washington Post

“This was the most surprising and thought-provoking book I read this year.” — Atlantic.com

“Yuval Noah Harari’s full-throated review of our species may have been blurbed by Jared Diamond, but Harari’s conclusions are at once balder and less tendentious than that of his famous colleague.” — New York magazine

“This title is one of the exceptional works of nonfiction that is both highly intellectual and compulsively readable… a fascinating, hearty read.” — Library Journal (starred review)

“An encyclopedic approach from a well-versed scholar who is concise but eloquent, both skeptical and opinionated, and open enough to entertain competing points of view.…The great debates of history aired out with satisfying vigor.” — Kirkus Reviews (starred review)

“Writing with wit and verve, Harari…attempts to explain how Homo sapiens came to be the dominant species on Earth as well as the sole representative of the human genus.… Provocative and entertaining.” — Publishers Weekly

“The most idea-packed work of non-fiction I’ve read in years.” — Dick Meyer, www.abcactionnews.com

“In this sweeping look at the history of humans, Harari offers readers the chance to reconsider, well, everything, from a look at why Homo sapiens endured to a compelling discussion of how society organizes itself through fictions.” — Booklist Best Books of the Year

“It’s not often that a book offers readers the possibility to reconsider, well, everything. But that’s what Harari does in this sweeping look at the history of humans.… Readers of every stripe should put this at the top of their reading lists. Thinking has never been so enjoyable.” — Booklist (starred review)

“The sort of book that sweeps the cobwebs out of your brain…. Harari…is an intellectual acrobat whose logical leaps will have you gasping with admiration.” — John Carey, Sunday Times (London)

“Harari’s account of how we conquered the Earth astonishes with its scope and imagination…. One of those rare books that lives up to the publisher’s blurb...brilliantly clear, witty and erudite.” — Ben Shepard, the Observer (London)

“An absorbing, provocative history of civilization…packed with heretical thinking and surprising facts. This riveting, myth-busting book cannot be summarised…you will simply have to read it.” — John Gray, Financial Times (London)

“Not only is Harari eloquent and humane, he is often wonderfully, mordantly funny” — The Independent (London)

“Harari can write…really, really write, with wit, clarity, elegance, and a wonderful eye for metaphor.” — The Times (Ireland)