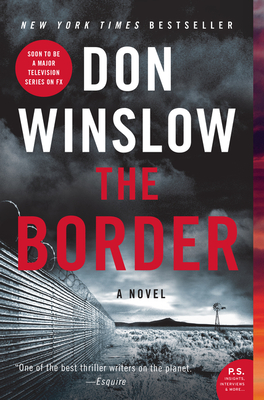 ONE OF THE MOST ACCLAIMED BOOKS OF THE YEAR

"One of the best thriller writers on the planet." – Esquire

The explosive, highly anticipated conclusion to the epic Cartel trilogy from the New York Times bestselling author of The Force

What do you do when there are no borders? When the lines you thought existed simply vanish?  How do you plant your feet to make a stand when you no longer know what side you’re on?

The war has come home.

For over forty years, Art Keller has been on the front lines of America’s longest conflict: The War on Drugs. His obsession to defeat the world’s most powerful, wealthy, and lethal kingpin?the godfather of the Sinaloa Cartel, Adán Barrera?has left him bloody and scarred, cost him the people he loves, even taken a piece of his soul.

Now Keller is elevated to the highest ranks of the DEA, only to find that in destroying one monster he has created thirty more that are wreaking even more chaos and suffering in his beloved Mexico. But not just there.

Barrera’s final legacy is the heroin epidemic scourging America. Throwing himself into the gap to stem the deadly flow, Keller finds himself surrounded by enemies?men who want to kill him, politicians who want to destroy him, and worse, the unimaginable?an incoming administration that’s in bed with the very drug traffickers that Keller is trying to bring down.

Art Keller is at war with not only the cartels, but with his own government. And the long fight has taught him more than he ever imagined. Now, he learns the final lesson?there are no borders.

In a story that moves from deserts of Mexico to Wall Street, from the slums of Guatemala to the marbled corridors of Washington, D.C., Winslow follows a new generation of narcos, the cops who fight them, street traffickers, addicts, politicians, money-launderers, real-estate moguls, and mere children fleeing the violence for the chance of a life in a new country.

A shattering tale of vengeance, violence, corruption and justice, this last novel in Don Winslow’s magnificent, award-winning, internationally bestselling trilogy is packed with unforgettable, drawn-from-the-headlines scenes. Shocking in its brutality, raw in its humanity, The Border is an unflinching portrait of modern America, a story of—and for—our time.

Don Winslow is the author of twenty-three acclaimed, award-winning international bestsellers, including six New York Times bestsellers (Savages, The Kings of Cool, The Cartel, The Force, The Border and City on Fire). Savages was made into a feature film by three-time Oscar-winning writer-director Oliver Stone and a screenplay by Shane Salerno, Winslow and Stone. Winslow's epic Cartel trilogy has been adapted for TV and will appear as a weekly series on FX in 2023. The Force is soon to be a major motion picture from 20th Century Studios starring Matt Damon with James Mangold directing from a Scott Frank screenplay. Additional Winslow books are currently in development at Netflix, Warner Brothers, Sony and Working Title and he has recently written a series of acclaimed short stories for Audible narrated by four-time Oscar nominee Ed Harris.

“A stunning and timely conclusion to Don Winslow’s drug-war trilogy. . . This is a book for dark, rudderless times, an immersion into fear and chaos. . . You don’t read these books; you live in them.” — New York Times

“Mr. Winslow writes gripping action sequences and wields statistics like a crusading journalist. Grand in scope, audacious in its political portraits, convincing in its socio-economic arguments and humane to the core, The Border is not only a formidable thriller but an important and provocative work.” — Wall Street Journal

“These angry, often heartbreaking books stand as the definitive fictional rendering of an ongoing modern tragedy. . . . The Border guides us through a savage, wholly believable world. The result is a powerful—and painful—journey through a contemporary version of hell. Rarely has hell been so compelling.” — Washington Post

“If Dostoevsky slung dope, he might have written the fierce morality tale that Winslow began with The Power of the Dog . . . Truth compacted into narrative by way of meticulous research. . . Eerily prescient and scathing. . . quite simply the most important crime saga in modern literature.” — Arizona Republic

“The Border is intricate, mean and swift, a sprawling canvass of characters. . . Granular detail and sharp dialogue have made his drug war trilogy propulsive and compelling. . . The stories unravel broken lives caught in a mesmerizing mosaic fueled by addiction and haunted by bloodshed.” — Los Angeles Times

“A landmark moment in crime fiction. . . . It is Winslow’s remarkable ability to translate the utter fiasco of our 50-year War on Drugs into the most wrenching of human stories, tragedy seemingly without end, that gives this novel its unparalleled power.” — Booklist [starred review]

“Peak page-turner. . . Will rattle your soul in those early-morning hours as you come face to face with all the corruption and depravity in the world. . . The crime-fiction equivalent of The Stand—the kind of compulsive Stephen King-esque epic that captivates and horrifies.” — Globe & Mail

“The Cartel and The Force were high water marks in the genre in terms of ambition and reach, and Winslow has excelled again. . . This is Winslow at his sensational best.” — Financial Times