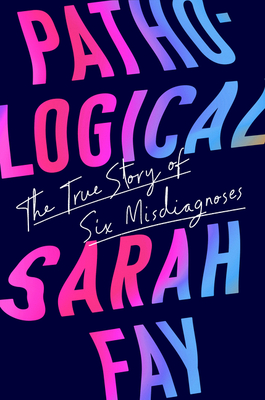 AN APPLE BOOKS PICK OF THE MONTH

“This book is a triumph of the spirit and the flesh.”—ELIZA GRISWOLD, Pulitzer Prize–winning author of Amity and Prosperity

In this stunning debut—both a memoir and a work of investigative journalism—writer Sarah Fay explores the ways we pathologize human experiences.

Over thirty years, doctors diagnosed Sarah Fay with six different mental illnesses—anorexia, major depressive disorder (MDD), anxiety disorder, attention deficit hyperactivity disorder (ADHD), obsessive-compulsive disorder (OCD), and bipolar disorder.Pathological is the gripping story of what it was like to live with those diagnoses, and the crippling impact each had on her life. It is also a rigorous investigation into the Diagnostic and Statistical Manual of Mental Disorders (DSM)—psychiatry’s “bible,” the manual from which all mental illness diagnoses come. Yet as Fay found out, some of our most prominent psychiatrists have been trying to warn us that the DSM is fiction sold to the public as fact.

In Pathological, former advisory editor at The Paris Review and award-winning writer Fay calls for a new conversation about mental health diagnosis, one based on rigorous transparency. With exquisite detail and a precise presentation of fact, she digs up her own life at the root to finally ask, Is a diagnosis a lifeline or a self-fulfilling prophecy?

Powerful, mesmerizing, and unputdownable, Pathological sits alongside the other brave and inspiring classics of our time that explore a more intelligent, forgiving, and nuanced approach to human suffering.

Sarah Fay is an author and activist. Her writing appears in many publications, including Longreads, The New York Times, The Atlantic, Time Magazine, The New Republic, McSweeney’s, The Believer, and The Paris Review, where she served as an advisory editor. She’s the recipient of the Hopwood Award for Literature, as well as grants and fellowships from Yaddo, the Mellon Foundation, and the MacDowell Colony, among others. She’s the founder of Pathological: The Movement (www.pathological.us.), a public awareness campaign devoted to making people aware of the unreliability and invalidity of DSM diagnoses and the dangers of identifying with an unproven mental illness. For more, visit www.sarahfay.org.

"Sharply personal and impeccably detailed, (Pathological) is bound to raise questions in the minds of readers diagnosed with any number of disorders about the validity of trying to cram individual experience into what Fay contends are essentially imaginary categories. A provocative and original examination of the flaws in mental health treatment." — Kirkus Reviews (starred review)

"Pathological is the best book I've read in many years. Masterfully written, distinctively researched, and deeply humane, it joins our finest literature on medicine and psychiatry and the eternal riddle we call our minds. Fay’s artful work is pleasingly unclassifiable: call it medical memoir; mental health thriller; comic punctuation primer; DSM and Big Pharma smackdown. I’ll just call it genius. It’s also contrarian, controversial, and beautifully, validly angry. If you or anyone you love has spent time in the mental health industrial complex (or, cauldron)—buy this book now and read it." — ANTHONY SWOFFORD, International and New York Times bestselling author of Jarhead

“In this brilliant and excruciating memoir, through careful reporting and exquisite analysis, Fay takes on the myriad ways in which women's minds, not simply our bodies, have become a marketplace for trendy and dangerous ideas about mental health. This book is a triumph of the spirit and the flesh for a woman who since the age of twelve has been fighting, against all odds, not only to survive, but to live.” — ELIZA GRISWOLD, Pulitzer Prize-winning author of Amity & Prosperity

“Fay is a deeply compelling person and a fantastic writer…We were wowed by her talent for bolstering personal stories with takeaways backed up with careful research. Pathological will make you passionate about improving the way we handle mental health.” — APPLE BOOKS

"We urgently need to think about our mental and emotional pain and distress in a more loving, nuanced, and intelligent way. Pathological will be a major contribution towards achieving that - a crucial and necessary book.” — JOHANN HARI, New York Times bestselling author of Lost Connections: Why You're Depressed and How to Find Hope

"An utterly unique memoir written with rare immediacy about the consequences of the language of psychiatric diagnosis. In Pathological, Fay beautifully describes navigating the uncertainty of six mental health misdiagnoses and brilliantly unpacks the dangers of labeling with a mental illness in the face of the complexities of our mental and emotional lives. Brave, heartbreaking, and inspiring, Pathological is a necessary book." — JENN PERCY, Journalist and writer at the New York Times Magazine and recipient of the National Magazine Award for Feature Writing

"Sarah Fay has written one of the most compelling memoirs I have read in ages. Pathological is a must-read for anyone who has been through the roller coaster that is the mental illness industry in America. Fay creates a work of art that entertains as much as it informs; if this were a movie, it would be the sort of documentary that contains every mode from romantic comedy to art-house film to thriller in one. The prose is so electric, incisive, witty, irreverent, devastating, sparkling! Whether she is riffing on the mechanics of English grammar, confronting the DSM in full-on unapologetic manifesto-mode, or winding us through the ups and downs of a very fully-lived life, Sarah Fay has created a masterpiece that is a true original on every level." — POROCHISTA KHAKPOUR, author of Sick: A Memoir