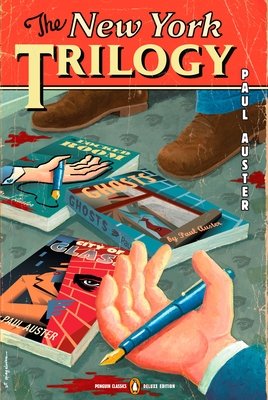 The remarkable, acclaimed series of interconnected detective novels – from the author of 4 3 2 1:  A Novel

The New York Review of Books has called Paul Auster's work “one of the most distinctive niches in contemporary literature.” Moving at the breathless pace of a thriller, this uniquely stylized triology of detective novels begins with City of Glass, in which Quinn, a mystery writer, receives an ominous phone call in the middle of the night. He’s drawn into the streets of New York, onto an elusive case that’s more puzzling and more deeply-layered than anything he might have written himself. In Ghosts, Blue, a mentee of Brown, is hired by White to spy on Black from a window on Orange Street. Once Blue starts stalking Black, he finds his subject on a similar mission, as well. In The Locked Room, Fanshawe has disappeared, leaving behind his wife and baby and nothing but a cache of novels, plays, and poems.

This Penguin Classics Deluxe Edition includes an introduction from author and professor Luc Sante, as well as a pulp novel-inspired cover from Art Spiegelman, Pulitzer Prize-winning graphic artist of Maus and In the Shadow of No Towers.

Paul Auster is the bestselling author of The New York Trilogy and many other critically acclaimed novels. He was awarded the Prince of Asturias Prize in 2006. His work has been translated into more than forty languages. He lives in Brooklyn, New York.

Luc Sante teaches writing and the history of photography at Bard College. His books include Low Life, Evidence, and The Factory of Facts.

Art Spiegelman is a cartoonist who first came to attention in the early 1980s as editor of the magazine Raw. His books include the Pulitzer Prize-winning Holocaust story Maus, Maus II, and In the Shadow of No Towers. He lives in New York City with his wife and two children.

Praise for The New York Trilogy:

“The plots twist, the dialogue snaps and the humor stings. Auster’s obsessions with identity, language, ambiguity and defeat are revealed on the long, tailing walks through the metropolis that give his labyrinthine novels their switchback shape, and New York looms throughout like a modern-day Babel.”
– The New York Times Magazine

“Eminently readable and mysterious. . .Auster has added some new dimensions to modern literature, and – more importantly even – to our perspectives on our planet.”
– Fanny Howe, The Boston Globe

“Exhilarating. . .a brilliant investigation of the storyteller’s art guided by a writer who’s never satisfied with just the facts.”
– The Philadelphia Inquirer

“It’s as if Kafka had gotten hooked on the gumshoe game and penned his own ever-spiraling version.” – The Washington Post

“Auster harnesses the inquiring spirit any reader brings to a mystery, redirecting it from the grubby search for a wrongdoer to the more rarified search for self.”
– The New York Times Book Review