The American President: From Teddy Roosevelt to Bill Clinton (Hardcover) 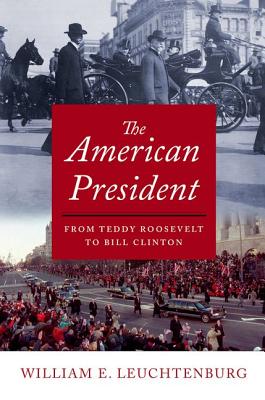 The American President is an enthralling account of American presidential actions from the assassination of William McKinley in 1901 to Bill Clinton's last night in office in January 2001. William Leuchtenburg, one of the great presidential historians of the century, portrays each of the
presidents in a chronicle sparkling with anecdote and wit. Leuchtenburg offers a nuanced assessment of their conduct in office, preoccupations, and temperament. His book presents countless moments of high drama: FDR hurling defiance at the economic royalists who exploited the poor; ratcheting tension for JFK as Soviet vessels approach an American naval
blockade; a grievously wounded Reagan joking with nurses while fighting for his life. This book charts the enormous growth of presidential power from its lowly state in the late nineteenth century to the imperial presidency of the twentieth. That striking change was manifested both at home in periods of progressive reform and abroad, notably in two world wars, Vietnam, and the war on
terror. Leuchtenburg sheds light on presidents battling with contradictory forces. Caught between maintaining their reputation and executing their goals, many practiced deceits that shape their image today. But he also reveals how the country's leaders pulled off magnificent achievements worthy of the
nation's pride. Now with a preface new to the paperback edition, The American President provides a timely reflection on the office that has shaped and continues to shape the destiny of the United States and its people.

William E. Leuchtenburg is the William Rand Kenan Jr. Professor Emeritus of History at the University of North Carolina, Chapel Hill. Over the course of six decades, he taught at Columbia University, UNC-Chapel Hill, and, as a visiting professor, at Harvard, Cornell, Duke, William and Mary and otherAmerican universities, as well as at Oxford where he held the Harmsworth chair. He served as presidential elections analyst for NBC and as presidential inauguration consultant for CBS, PBS, and C-SPAN. Elected president of the American Historical Association, the Organization of American Historians, and the Society of American Historians, he is the first recipient of the Arthur M. Schlesinger, Jr. Award for Distinguished Writing in American History of Enduring Public Significance. He is the author of fifteen books, including The Perils of Prosperity, 1914-32, Franklin D. Roosevelt and the NewDeal, 1932-1940, In the Shadow of FDR: From Harry Truman to Ronald Reagan, The White House Looks South: Franklin D. Roosevelt, Harry S. Truman, Lyndon B. Johnson, The FDR Years: On Roosevelt and His Legacy, and Herbert Hoover.