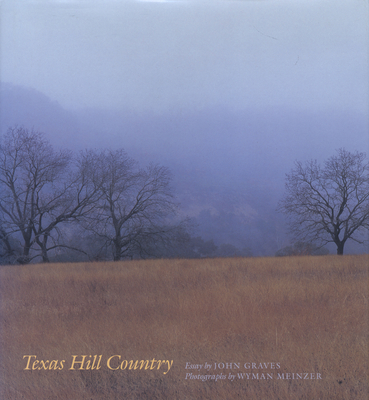 By John Graves, Wyman Meinzer
$39.95
On Our Shelves Now

Limestone hills, cold spring-fed streams, live oaks and cedar, old German towns--the Texas Hill Country may well be the most beloved region of the state. Unlike West Texas with its dramatic expanses of plains and sky, or the eastern Piney Woods in their lush fecundity, the Hill Country never overwhelms. Its intimate landscapes of rolling hills, fields of wildflowers, and cypress-shaded rivers impart a peace and serenity that draws the urban-weary from across Texas and even beyond.

In this volume, two of the state's most respected artists join their talents to create an unsurpassed portrait of the Texas Hill Country. With an unerring eye for landscape photography, Wyman Meinzer distills the visual essence of the Hill Country--long vistas of oak-and-cedar-covered hills, clear streams running over rocks, bluebonnets turning fields into lapis-colored seas. His photographs also go beyond the familiar to reveal surprising contrasts and juxtapositions--prickly pear cactus delicately frosted with ice, black-eyed susans growing among granite boulders.

With an equally true feeling for what makes the Hill Country distinct, John Graves writes about the land and its people and how they have shaped one another. He pays tribute to the tenacious German pioneers who turned unpromising land into farms and ranches, the Anglo-American "cedar-choppers" who harvested the region's pest plant, and even the generations of vacationers who have found solace in the Hill Country. As Graves observes, "since well over a century ago, the region has been a sort of reference point for natives of other parts of the state, and mention of it usually brings smiles and nods."

Together, John Graves and Wyman Meinzer once again demonstrate that they are the foremost artists of the Texas landscape. The portrait they create in images and words is as close as you can come to the heart of the Hill Country without being there.