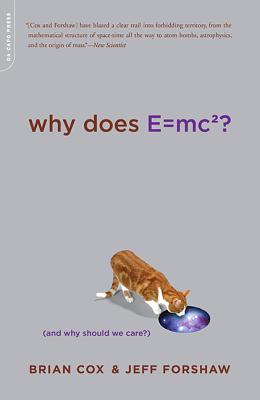 The international bestseller: an introduction to the theory of relativity by the eminent physicists Brian Cox and Jeff Forshaw

What does E=mc2 actually mean? Dr. Brian Cox and Professor Jeff Forshaw go on a journey to the frontier of twenty-first century science to unpack Einstein's famous equation. Explaining and simplifying notions of energy, mass, and light-while exploding commonly held misconceptions-they demonstrate how the structure of nature itself is contained within this equation. Along the way, we visit the site of one of the largest scientific experiments ever conducted: the now-famous Large Hadron Collider, a gigantic particle accelerator capable of re-creating conditions that existed fractions of a second after the Big Bang. A collaboration between one of the youngest professors in the United Kingdom and a distinguished popular physicist, Why Does E=mc2? is one of the most exciting and accessible explanations of the theory of relativity.

Brian Cox, OBE, FRS, is a Professor of Particle Physics at the University of Manchester and the Royal Society Professor for Public Engagement in Science. His many highly acclaimed BBC television documentaries include, most recently, Human Universe and Forces of Nature.

Jeff Forshaw is a Professor of Theoretical Physics at the University of Manchester, specializing in the physics of elementary particles. He was awarded the Institute of Physics Maxwell Medal in 1999 for outstanding contributions to theoretical physics.

"If you're not a physicist (or not yet a physicist) and you want to understand what Einstein and relativity are all about, you would do well to read this book. This writing is clear, sparkling in places, and totally without vanity...Read this book. It's your world, isn't it?"
—Dan Agin, Huffington Post

"A mild mannered, digressive, mostly math-free walk-through of the world's most famous equation...[It] remind[s] us that Einstein's equation is not some esoteric idea best pondered by scientific supermen, but a profound insight that continues to change lives...Cox and Forshaw's enthusiasm for their material is plain...You will find them accommodating escorts."
—Boston Globe

"Cox and Forshaw skillfully combine biography with a narrative of discovery, employing some of Einstein's own thought experiments...I expected Cox and Forshaw to lament the current gaps in physics...But they are optimists tempered by hard doses of reality."
—The American Scholar

"Pairs the enthusiasm of newcomers with the knowledge of experts...Cox and Forshaw have aimed their tour of gravity, mass and quantum weirdness squarely at the math-shy general public...A useful reminder of how profoundly strange physics can appear to the novice."
—Physics World

"Master Einstein's famous equation in 266 easy pages: The authors answer their title question without using math more complicated than the Pythagorean theorem, providing a rich history of modern physics along the way."
—Discovery

"Brian Cox and Jeff Forshaw tackle the most famous equation of all time in a remarkable comprehensible way...The pair make some surprising points that I haven't seen expressed in quite the same way...Well worth a read."
—New Scientist

"To get at the origins of E=mc2, the poster-child for Einstein's special theory of relativity, [Cox and Forshaw] must delve into deep principles of science and wield a good deal of mathematics. They do it well...They have blazed a clear trail into forbidding territory, from the mathematical structure of space-time all the way to atom bombs, astrophysics and the origin of mass."
—New Scientist

"To move beyond a cursory understanding of Einstein's iconic equation, put yourself in the adept hands of physicists and science educators Brian Cox and Jeff Forshaw. Using clear language and a few clearly explained equations, they demystify physics' most counterintuitive claims."
—Seed

"[Cox and Forshaw] bend over backwards to reassure math-challenged readers...This is not only a painstakingly accessible explanation of spacetime, mass, particles, gravity, and a whole bunch of things that are just plain not simple. It's also an explanation, for non-scientists, of what physicists do, and why they want to do it."
—Bookslut.com

"A fun romp with science...The often amusing lecture by British physicists Brian Cox and Jeff Forshaw is written in plain language and full of fun examples."—Charleston Post and Courier

"A popular account of the intellectual interplay between elementary particle physics, relativity theory, and cosmology...It does a very nice job of explaining the counterintuitive aspects of spacetime and the relationship between time, space, energy, and mass...Readers of this book will be better prepared to understand the news coming out of CERN...Recommended."
—Choice

"[An] easy-to-read little book...Along the way, [Cox and Forshaw] very cleverly introduce all the ideas we will need to get to the world's most famous equation, E=mc2...Cox and Forshaw have made an important contribution in this area, one that will help school science teachers as much as it will their students."—New York Journal of Books