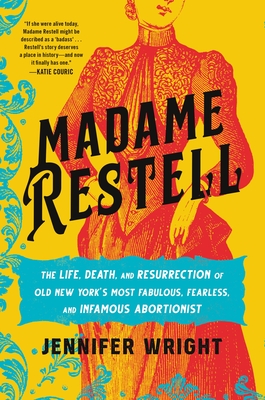 “This is the story of one of the boldest women in American history: self-made millionaire, a celebrity in her era, a woman beloved by her patients and despised by the men who wanted to control them.”

An industrious immigrant who built her business from the ground up, Madame Restell was a self-taught surgeon on the cutting edge of healthcare in pre-Gilded Age New York, and her bustling “boarding house” provided birth control, abortions, and medical assistance to thousands of women—rich and poor alike. As her practice expanded, her notoriety swelled, and Restell established her-self as a prime target for tabloids, threats, and lawsuits galore. But far from fading into the background, she defiantly flaunted her wealth, parading across the city in designer clothes, expensive jewelry, and bejeweled carriages, rubbing her success in the faces of the many politicians, publishers, fellow physicians, and religious figures determined to bring her down.

Unfortunately for Madame Restell, her rise to the top of her field coincided with “the greatest scam you’ve never heard about”—the campaign to curtail women’s power by restricting their access to both healthcare and careers of their own. Powerful, secular men—threatened by women’s burgeoning independence—were eager to declare abortion sinful, a position endorsed by newly-minted male MDs who longed to edge out their feminine competition and turn medicine into a standardized, male-only practice. By unraveling the misogynistic and misleading lies that put women’s lives in jeopardy, Wright simultaneously restores Restell to her rightful place in history and obliterates the faulty reasoning underlying the very foundation of what has since been dubbed the “pro-life” movement.

Thought-provoking, character-driven, boldly written, and feminist as hell, Madame Restell is required reading for anyone and everyone who believes that when it comes to women’s rights, women’s bodies, and women’s history, women should have the last word.

Jennifer Wright is the author of several pop history books, including It Ended Badly and Get Well Soon (winner of Audible’s “Best History Book of 2017”). She lives in Los Angeles with her husband—fellow writer Daniel Kibblesmith—and their daughter.

“Jennifer Wright is one of the best writers of history working today, and it’s a gift to all of us that she’s choosing to focus her tremendous skill as a researcher and singular voice on an all-but-forgotten figure like Madame Restell. To call this book timely would be an understatement. It functions not only as a brilliant biography but also a timeless reminder of the way history can be erased and changed to serve modern political purposes.”—DANA SCHWARTZ, #1 New York Times bestselling author of ANATOMY: A LOVE STORY and host of NOBLE BLOOD

“It may be a 19th century story, but Madame Restell's battles with sanctimonious hypocrites and condescending men feels all too modern, especially in an era when basic rights are once again being taken away. Luckily, Jennifer Wright has a wry humor and light hand, making this book as fun as it is inspiring.”—AMANDA MARCOTTE, Senior Political Writer at Salon and Author of TROLL NATION

“Reading Jennifer Wright’s books is always like having a brilliant friend tell you fascinating history you can’t believe you never heard of before. MADAME RESTELL is no exception—it’s a page-turning ride through the Gilded Age that will make you laugh, make you cry, and enrage you by turns.”—ALEXANDRA PETRI, Washington Post columnist and author of Alexandra Petri’s US History

“Like the woman herself, MADAME RESTELL is smart, fascinating, complicated, and not to be denied. Wright has written that most delicious of books, the true story of a bad bitch, a woman whose work is as relevant as your social media timeline, only it’s true.”—QUINN CUMMINGS, author of NOTES FROM THE UNDERWIRE and SMALL STORIES (2018-2020)

“MADAME RESTELL is a book about one of America's most infamous 19th century abortion providers, which is to say it's a delightful, indecorous, and sometimes disturbing story about the whole of American history: Capitalism and class, feminism and freedom, and puritanical hypocrites who find their authority challenged by women who want a littler power (and are willing to be more than a little bawdy in order to get it). If you want to understand contemporary politics, from brave women who break the law to the misogynist moral scolds who still want women under their thumb to the inevitable interplay of despair and resistance in the pursuit of liberation—or if you just want to read a truly captivating tale of the most important woman you've never heard of—don't miss MADAME RESTELL.”—JILL FILIPOVIC, journalist and author of THE H-SPOT

"[An] impassioned and irreverent biography... Wright paints a vivid picture of Restell’s rise to prominence and weaves in intriguing details about the history of birth control and abortion. This feminist history fascinates."—Publishers Weekly

“Wright’s well-researched biography is not only interesting, but, sadly, timely. A fresh contribution to women’s history.”—Kirkus