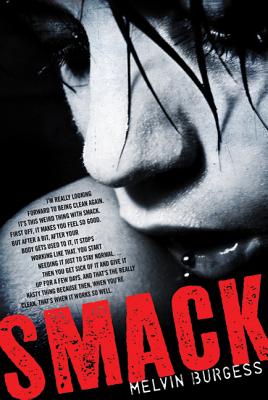 Sometimes maybe you need an experience. The experience can be a person or it can be a drug. The experience opens a door that was there all the time but you never saw it. Or maybe it blasts you into outer space. This time it was Lily and Rob and Gemma spending all that time to make me feel one of them, but it was the drug too. All that crap—about Gemma leaving me, about Mum and Dad, about leaving home. All that negative stuff. All the pain . . .
It just floated away from me, I just floated away from it . . . up and away . . .
I leaned back and I looked at the book and I looked at them and Gemma smiled at me, a big soft smile, and her eyes were like marbles.
"Better?" she said.

Smack is the winner of the 1996 Carnegie Medal in Literature.

Melvin Burgess is the author of many novels for young adult and middle-grade readers. Among them are Nicholas Dane, Doing It (a New York Public Library Book for the Teen Age), The Ghost Behind the Wall (Bank Street Best Children's Book of the Year) and Smack (winner of Britain's Carnegie Medal and the Guardian Prize for Fiction, as well as an ALA Best Book for Young Adults).  In 2001, he wrote the novelization of the film, Billy Elliot. Mr. Burgess lives in Hebden Bridge, West Yorkshire, in England.

“Searing . . . unflinching . . . seductive . . . insidious . . . flawless. This is one novel that will leave an indelible impression on all who read it.” —Publishers Weekly, Starred Review

“Cuts to the bone. . . . Based on actual people and incidents, this harrowing tale is as compellingly real as it is tragic.” —Kirkus Reviews, Starred Review

“Smack is filled with cool British lingo and interesting characters, all the while subtly delivering a harrowing message about addiction.” —Seventeen

“Smack pulls no punches: Drugs can be fun. And Smack makes it relentlessly clear that fun comes at a vicious price. . . . It will leave you reeling.” —Denver Post

“[A] gritty, no punches-pulled chronicle.” —News and Observer, Raleigh, NC

“It does exactly what teenagers want a book to do. It tells the truth. It doesn't preach. It makes you think. . . .Smack is as addictive as the drug it profiles. You will not be able to put it down.” —VOYA

“[A] boot-in-the-gut look at British kids on the dole and drugs.” —Toronto Globe & Mail