The Hollow Kind: A Novel (Hardcover) 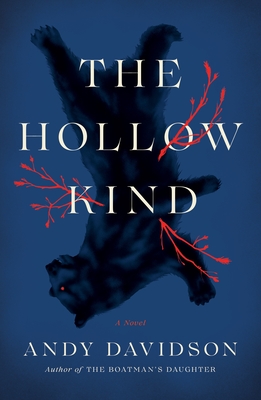 "The Hollow Kind seeps into your subconscious and waits for you in your nightmares." —S. A. Cosby, bestselling author of Razorblade Tears

Andy Davidson's epic horror novel about the spectacular decline of the Redfern family, haunted by an ancient evil.

Nellie Gardner is looking for a way out of an abusive marriage when she learns that her long-lost grandfather, August Redfern, has willed her his turpentine estate.

It turns out that the "estate" is a decrepit farmhouse on a thousand acres of old pine forest, but Nellie is so thrilled about the chance for a fresh start for her and her son, that she doesn't notice that there's something wrong with Redfern Hill. Something lurks beneath the soil, ancient and hungry, with the power to corrupt hearts and destroy souls.

From the author of The Boatman's Daughter, The Hollow Kind is a jaw-dropping novel about legacy and the horrors that hide in the dark corners of family history. Andy Davidson's gorgeous, Gothic fable tracing the spectacular fall of the Redfern family will haunt you long after you turn the final page.

Andy Davidson is the Bram Stoker Award nominated author of In the Valley of the Sun and The Boatman's Daughter, which was listed among NPR's Best Books of 2020, the New York Public Library's Best Adult Books of the Year, and Library Journal's Best Horror of 2020. Born and raised in Arkansas, he makes his home in Georgia with his wife and a bunch of cats.

"Andy Davidson is quickly establishing himself as the newest master of southern gothic horror. The Hollow Kind seeps into your subconscious and waits for you in your nightmares."
—S. A. Cosby, bestselling author of Razorblade Tears

"The Hollow Kind is a classic piece of Southern Gothic literature: dense, baroque, and rooted in the history of the land. Faulkner and Lovecraft would both approve."
—Neil McRobert, Esquire

“A deep, dark story of family secrets and inherited horrors, Andy Davidson’s The Hollow Kind is as gripping and twisted as old tree roots—you can practically smell the creosote and longleaf pine. This one kept me up, turning pages long into the night.”
—T. Kingfisher, author of What Moves the Dead

“The Hollow Kind is a gloriously wild, twisted family saga with buckets of body horror and is going to mess you up good.”
—Paul Tremblay, author of The Pallbearers Club, on Twitter

"A visceral story that weaves past and present together, The Hollow Kind is a well-crafted tale about secrets that refuse to stay hidden, the weight of past sins, and redemption. With atmospheric imagery, compelling characters, and a gripping premise, Davidson proves why horror is one of the most effective genres for exploring interpersonal conflict and the complicated nature of familial relationships."
—Popmatters

"With his third novel, Davidson plants his roots in horror’s soil as one its most talented voices . . . The Hollow Kind is a Southern Gothic epic that masterfully weaves elements of body, folk, and cosmic horror, knitting it all together into something wholly new, immersive, terrifying, and utterly breathtaking."
–Becky Spratford, Booklist

"Whether you call it historical horror, folk horror, or southern gothic, Andy Davidson's The Hollow Kind is as beautifully written as it is chilling. The combination of dual timelines with a little-explored piece of America's past truly sets this book apart. Every page reverberates with inescapable dread."
—Alma Katsu, author of The Fervor

“A gorgeously written novel that mixes Southern Gothic à la Flannery O’Connor, backwoods noir, and the mythic imagination of Clive Barker . . . [A] lush nightmare [that] put an arrow through my head and heart.”
—Paul Tremblay, author of Growing Things

"Andy Davidson probably wrote The Boatman's Daughter sitting at a table at home or at a coffee joint. But it reads as if he pulled it out of the wet earth of the Arkansas bayous with his bare hands on a moonless night while chanting an incantation he learned from a dying witch."
—Gabino Iglesias, NPR

"An inverted fairytale . . . [Andy Davidson is] an extremely talented writer who goes beyond the boundaries of genres to deliver a gripping tale."
—Mystery Tribune

“Wild and wonderful—a sentence-by-sentence delight.”
—Michael Koryta, author of How It Happened

"The Boatman's Daughter is a greasy, magical Southern Gothic fable. Davidson pens a vivid backdrop for his colorful characters to come alive and draw the reader into an eerie supernatural thriller."
—Sadie Hartman, Mother Horror