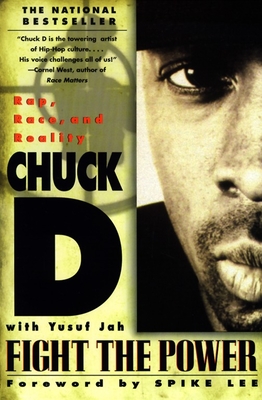 Like the hard-hitting sounds of a Public Enemy jam, the words of the band's lead singer, Chuck D, excite the mind and senses.  In his first book, Chuck D pours out commentary that takes on Hollywood, race, the music industry, the murders of Tupac and the Notorious B.I.G., drugs, and the three E's--education, economics and enforcement.  Likening the challenge to "scaling a slick mountain on roller skates," Chuck D lets no one off the hook, putting celebrities and street kids alike on notice that the future is up for grabs...and the only way to be part of it, to be players not victims, is to work together.

As an insider's view on Hip-Hop culture slides into intimate revelations about his own life, as lyrics from his songs bump shoulders with top ten lists like "The Greatest Rappers of All Time," Chuck D has his say with verve and electrifying energy, with anger, love and truth.  A book that brings light into darkness, Fight the Power speaks for a generation.  It is a powerful and prophetic message that America, both Black and White, urgently needs to hear.

Nightline with Chuck as the featured guest.

His rejection of celebrity and his constant community activism have made him a hero. For the past five years he's been touring colleges and universities, delivering three hour lectures on everything from the music industry's corruption of young talent, the history of black music from Blues to Rap, his own controversial lyrics, problems in the black community, self-empowerment, contemporary culture and current political leaders to Public Enemy's rise to international stardom. All while maintaining his solo and Public Enemy's recording careers.

Fight the Power examines a multitude of complex social, racial and artistic issues. In his unmistakable voice, Chuck discusses the role of heroes and role models in the black community, Hollywood's negative images of blacks, the effect of gangsta rap, its images on the country's youth and the war between east and west coast rappers that may have spawned the murder of Tupac Shakur, the role of athletes and entertainers in eroding and strengthening values, and other vital contemporary concerns. Candid, thoughtful, and in your face, Fight the Power, the first substantial book by a rapper, offers readers a look into the culture of hip hop and the future of Black culture. -->

Chuck D, one of the pioneers of Rap music, is the founder and lead rapper for Public Enemy, which has a fan base of over twenty million people.  Aside from his work with the "Rock the Vote" campaign, for which he was honored with the Patrick Lippert Humanitarian Award, he recently signed on as a reporter for the Fox News Channel.  He also acted in his first film, An Alan Smithee Film--Burn, Hollywood, Burn.  A new Public Enemy album was released in late 1997.

Yusuf Jah is the author of Uprising: Crips and Bloods Tell the Story of America's Youth in Crossfire.  He has also written two other books relating to the Black community and has lectured in colleges across the country.

"Chuck D is the towering artist of Hip-Hop culture....His voice challenges all of us!"
--Cornel West, author of Race Matters

"Fight the Power will raise some hackles, generate some furor, and, most importantly, get people thinking about the way things are, and why."
--Chicago Sun-Times

"Gives free rein to hip-hop's longest-standing cultural watchdog....Anyone who expresses support for both Tupac and C. Delores Tucker in one book is worth listening to."
--The Source