Six Days in August: The Story of Stockholm Syndrome (Hardcover) 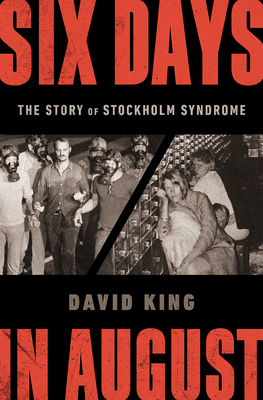 By David King
Email or call for price

The definitive account of the bizarre hostage drama that gave rise to the term "Stockholm syndrome."

On the morning of August 23, 1973, a man wearing a wig, makeup, and a pair of sunglasses walked into the main branch of Sveriges Kreditbank, a prominent bank in central Stockholm. He ripped out a submachine gun, fired it into the ceiling, and shouted, "The party starts!" This was the beginning of a six-day hostage crisis—and media circus—that would mesmerize the world, drawing into its grip everyone from Sweden’s most notorious outlaw to the prime minister himself.

As policemen and reporters encircled the bank, the crime-in-progress turned into a high-stakes thriller broadcast on live television. Inside the building, meanwhile, complicated emotional relationships developed between captors and captives that would launch a remarkable new concept into the realm of psychology, hostage negotiation, and popular culture.

Based on a wealth of previously unpublished sources, including rare film footage and unprecedented access to the main participants, Six Days in August captures the surreal events in their entirety, on an almost minute-by-minute basis. It is a rich human drama that blurs the lines between loyalty and betrayal, obedience and defiance, fear and attraction—and a groundbreaking work of nonfiction that forces us to consider "Stockholm syndrome" in an entirely new light.

David King is the New York Times best-selling author of Death in the City of Light, Vienna 1814, and The Trial of Adolf Hitler. He taught European history at the University of Kentucky, and lives in Lexington, Kentucky.

Fascinating…tightly paced and reads like a thriller novel; King’s writing is electrifying but never lurid…Six Days in August is a true-crime book that has real appeal to all readers—it’s a thrilling look back at a robbery that remains one of the most bizarre crimes of the 20th century.

From its opening scene, in which a gun-toting man in a wig, makeup, and sunglasses bursts into a bank in central Stockholm and shouts 'The party starts!,' Six Days in August reads like a movie…[King] is adept at teasing out the humanity of the criminals as well as their victims, helping the reader to understand the unlikely and psychologically complex bonds that develop between victim and oppressor.

— Dan Bilefsky, staff writer for The New York Times and author of The Last Job: The “Bad Grandpas” and the Hatton Garden Heist

A mesmerizing account, not only of the first bank heist to become a global media sensation as it was happening, but of how our understanding of ‘Stockholm Syndrome’ is all wrong. Six Days in August is impeccably researched, with characters out of central casting and riveting dialogue. Black humor, Scandinavian noir, and it’s all true.

— Kirk Wallace Johnson, author of The Feather Thief: Beauty, Obsession, and the Natural History Heist of the Century

Suspenseful…A true-crime page-turner about one of the more notorious bank heists of the past half century.
— Kirkus Reviews