Monsters Among Us: An Exploration of Otherworldly Bigfoots, Wolfmen, Portals, Phantoms, and Odd Phenomena (Paperback) 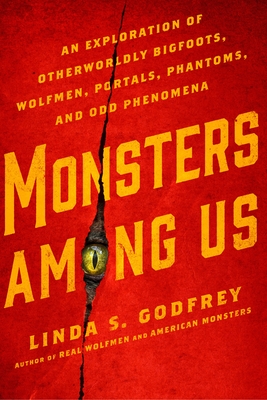 Have you ever seen something you couldn’t explain?

This meticulously researched and thrilling exploration of the otherworldly will challenge your idea of reality. Mysterious wolf-people, sentient mists, and UFOs…if you've ever heard a curious bump in the night, caught a glimpse of a strange-looking someone (or something) out of the corner of your eye, or seen an unusual craft dart across the sky before it vanishes without a trace, there's only one person to call: Linda S. Godfrey. An expert in strange creatures and lore, she has offered reporting on bigfoots, werewolves, strange energy forms, and other bizarre beings for years.

Godfrey will enthrall even skeptics as she leads you through the mystical, legendary, and scientific angles of these creatures and the myths that surround them. Within these pages, you will encounter:

- First-hand testimony of a terrifying transformation from woman to beast (during a church service, no less)
- The Lost Lizard People of Los Angeles
- A growling, phantomlike home invader
- Wolfmen who walk on two legs
- People stalked by invisible predators

Delivering a broad mix of modern-day and historical sightings, and supported by Godfrey's interviews with eyewitnesses, Monsters Among Us is essential reading for anyone hunting for the real accounts behind their childhood campfire stories.

LINDA S. GODFREY is one of America's foremost authorities on modern-day monsters. She is the author of over a dozen books on werewolves, hauntings, and the paranormal, including Real Wolfmen: True Encounters in Modern America, American Monsters: A History of Monster Lore, Legends, and Sightings in America, and Weird Michigan. Godfrey has appeared on many national TV shows such as The History Channel's Monster Quest, Inside Edition, and Sean Hannity, and has been a guest on radio shows such as Coast to Coast AM.

"Godfrey frequently draws from myth and folklore and cites cases from history and pop culture, demonstrating extensive knowledge of her subject matter. The book will prove a handy encyclopedia for enthusiastic cryptozoologists of all ages." —Publishers Weekly

"[Godfrey]'s most satisfying book to date...Monsters Among Us is way more than a collection of camp-fire tales of bloodthirsty werewolves, rampaging Dogmen, and mystifying activity. It keeps the reader captivated and skilfully plunges them deep into the heart of the mystery. By heading down a winding path marked “Paranormal Phenomena” and “Fringe Science,” Linda has made the most significant steps in this area since John Keel got the UFO- and monster-hunting communities coming out in rashes by daring to suggest the things they sought- and much more – were part and parcel of the same thing."--Nick Redfern, author of Women In Black and Bloodline of the Gods

“She has the ability to send chills up and down your spine.”
—Brad Steiger, author of Real Ghosts, Restless Spirits, and Haunted Places