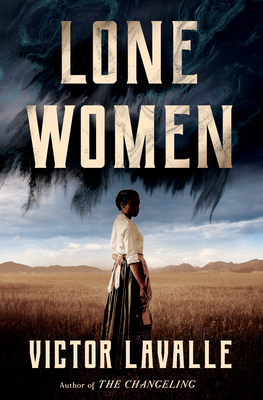 Blue skies, empty land—and enough wide-open space to hide a horrifying secret. A woman with a past, a mysterious trunk, a town on the edge of nowhere, and a bracing new vision of the American West, from the award-winning author of The Changeling.

”If the literary gods mixed together Haruki Murakami and Ralph Ellison, the result would be Victor LaValle.”—Anthony Doerr, Pulitzer Prize-winning author of All the Light We Cannot See

Adelaide Henry carries an enormous steamer trunk with her wherever she goes. It’s locked at all times. Because when the trunk opens, people around Adelaide start to disappear.

The year is 1915, and Adelaide is in trouble. Her secret sin killed her parents, forcing her to flee California in a hellfire rush and make her way to Montana as a homesteader. Dragging the trunk with her at every stop, she will become one of the “lone women” taking advantage of the government’s offer of free land for those who can tame it—except that Adelaide isn’t alone. And the secret she’s tried so desperately to lock away might be the only thing that will help her survive the harsh territory.

Crafted by a modern master of magical suspense, Lone Women blends shimmering prose, an unforgettable cast of adventurers who find horror and sisterhood in a brutal landscape, and a portrait of early-twentieth-century America like you’ve never seen. And at its heart is the gripping story of a woman desperate to bury her past—or redeem it.

Victor LaValle is the author of seven works of fiction: four novels, two novellas, and a collection of short stories. His novels have been included in best-of-the-year lists by The New York Times Book Review, Los Angeles Times, The Washington Post, Chicago Tribune, The Nation, and Publishers Weekly, among others. He has been the recipient of a Guggenheim Fellowship, an American Book Award, the Shirley Jackson Award, and the Key to Southeast Queens. He lives in the Bronx with his wife and kids and teaches at Columbia University.

“LaValle’s vivid, three-dimensional characters are always a draw, and this fascinating cast is a real treat, plus he introduces lesser-known pieces of American history in a way that never feels didactic. . . . Highly recommended for historical fiction readers just as much as die-hard horror fans.”—Vulture, “31 Books We Can’t Wait to Read in 2023”

“LaValle’s work is always darkly magical, suspenseful and deeply compelling. . . . [In] Lone Women LaValle tells the story of Adelaide, a homesteading woman in 1915 Montana with secrets—and a giant steamer trunk. Expect richness, surprise and beauty from this visionary new rendering of the historic American West.”—Salon, “22 books we're looking forward to in 2023”

“Beguiling . . . LaValle is prodigiously talented at playing with stylistic modes, and here he deftly combines Western, suspense, supernatural, and horror—his prose is unfussy and plainspoken, which makes it easier to seamlessly skate across genres. But LaValle’s fluidity when it comes to style is balanced by a focused thematic vision: Through Adelaide (and that steamer trunk), he explores isolation and division across race, within families, and through communities. . . . [The] novel overall is a winning blend of brains and (occasionally violent) thrills. . . . Acrobatic storytelling, both out there and down-home.”—Kirkus Reviews (starred review)

“A counter to the typical homesteading narrative, this moody and masterful western fires on all cylinders. Readers are sure to be impressed.”—Publishers Weekly