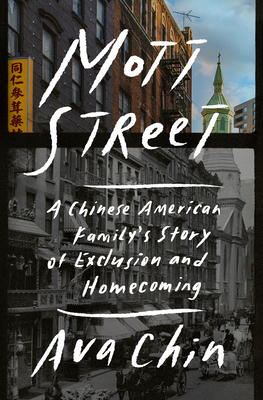 From the winner of the M.F.K. Fisher Book Prize and a New York Public Library Cullman fellow comes a sweeping narrative history of the Chinese Exclusion Act through an intimate portrayal of one family’s epic journey to lay down roots in America

As the only child of a single mother in Queens, Ava Chin found her family’s origins to be shrouded in mystery. She had never met her father, and her grandparents’ stories didn’t match the history she read at school. Mott Street traces Chin’s quest to understand her Chinese American family’s story. Over decades of painstaking research, she finds not only her father but also the building that provided a refuge for them all.

Breaking the silence surrounding her family’s past meant confronting the Chinese Exclusion Act of 1882—the first federal law to restrict immigration by race and nationality, barring Chinese immigrants from citizenship for six decades. Chin traces the story of the pioneering family members who emigrated from the Pearl River Delta, crossing an ocean to make their way in the American West of the mid-nineteenth century. She tells of their backbreaking work on the transcontinental railroad and of the brutal racism of frontier towns, then follows their paths to New York City.

In New York’s Chinatown she discovers a single building on Mott Street where so many of her ancestors would live, begin families, and craft new identities.  She follows the men and women who became merchants, “paper son” refugees, activists, and heads of the Chinese tong, piecing together how they bore and resisted the weight of the Exclusion laws. She soon realizes that exclusion is not simply a political condition but also a personal one.

Gorgeously written, deeply researched, and tremendously resonant, Mott Street uncovers a legacy of exclusion and resilience that speaks to the American experience, past and present.

Ava Chin is the author of Eating Wildly, winner of the Les Dames d’Escoffier International M.F.K. Fisher Book Prize. Her writing has appeared in The New York Times, The Washington Post, the Los Angeles Times, The Village Voice, and Saveur. She is the recipient of grants and fellowships from the New York Public Library’s Cullman Center, the Fulbright U.S. Scholar Program, New York Foundation for the Arts, New York Institute for the Humanities, and the Asian American Writers’ Workshop. She is an associate professor of creative nonfiction at the City University of New York.

“Ava Chin accomplishes an astonishing feat: by tracing five generations of her own Chinese American ancestors, she also traces the story of Chinese exclusion, illuminating an often-ignored part of our national past. Mott Street is a vibrant and moving family story, but it’s also essential reading for understanding not just Chinese American history, but American history—and the American present.” —Celeste Ng, #1 bestselling author of Our Missing Hearts and Little Fires Everywhere

“Ava Chin’s quest to learn the story of her family uncovers another story: the American government’s almost century-long discriminatory treatment of Chinese immigrants and their children—a shameful episode in our history, and one that should be more widely known. Anti-Asian racism did not begin with Covid. Mott Street is written with feeling, with anger, and compassion. It’s a book from the heart. —Louis Menand, Pulitzer Prize-winning author of The Free World

“Ava Chin's fierce intelligence and gorgeous writing gives us an exciting and essential social history of three generations of Chinese New Yorkers that expands our understanding of American life. This important and much needed work will enrich our common conversation and how we know ourselves.” —Sarah Schulman, author of Let the Record Show

“Mott Street should be required reading. Tracing the lineage of her own family, Ava Chin commits to the written record a foundational piece of American history that has been erased for too long. Thoroughly researched and powerfully told, Mott Street examines the legacy of Exclusion and what it means—for a nation, for a family, and for a human.” —Qian Julie Wang, New York Times Bestselling author of Beautiful Country

“Ava Chin entered a six-story building in New York’s Chinatown and found a portal—one that led not only to both sides of her sprawling and turbulent family history, but to a visceral understanding of the Chinese-American experience in all its glory and pain. Mott Street is a masterful distillation of decades of research and storytelling, written with love, sorrow, and rage.” —Janice P. Nimura, New York Times Bestselling author of The Doctors Blackwell

“Ava Chin blazes a path through the fictions made necessary by the Chinese Exclusion Act to a gorgeously intimate story of her own family across generations and a powerful indictment of the ways this country's past xenophobia reverberates in the present. She discovers that many of her ancestors' histories flow through a single building on Mott Street, a place that simultaneously grounds and unleashes the spirit of their collective story. A beautiful and necessary book.” —Maud Newton, author of Ancestor Trouble

“Ava Chin has created a stunning work of genealogy that traces her family’s legacy in America back from present day Mott Street in New York City to the early days of Chinese Exclusion in California. It is a tender and loving portrait of her ancestors, depicting their joys and struggles as they built both the nation’s infrastructure and spaces of resistance and belonging for those excluded from the nation. More than a family history, Mott Street is a history of a people's survival and a history of America.​” —Grace M. Cho, author Tastes Like War

“Ava Chin has taken the stories she was told and the hurts that came her way in childhood and transformed them into an historically researched portrayal of two families in a new country that wanted their labor but not their citizenship. Chin reveals the pain that overcomes her as she learns her past but she proceeds by drawing strength from feeling her ancestors all around her in their building in Manhattan's Mott Street. The essence of this story is a yearning to understand the past and to discover what Chin can make of her glorious yet underusing inheritance in her present life as an author, professor, and parent. Mott Street is a masterpiece that opens up a unique history into a consideration of what came before that offers inspiration for all readers.” —Alice Elliott Dark, author of Fellowship Point

“Sweeping yet intimate, Mott Street is a lyrical, gripping account of survival, resilience and resistance. Through tireless research, Ava Chin uncovers the stories of her family that might have been lost to history. Deeply moving and unforgettable.” —Vanessa Hua, Forbidden City