The Curse of the Marquis de Sade: A Notorious Scoundrel, a Mythical Manuscript, and the Biggest Scandal in Literary History (Hardcover) 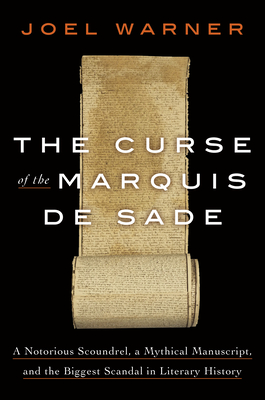 The captivating, deeply reported true story of how one of the most notorious novels ever written—Marquis de Sade’s 120 Days of Sodom—landed at the heart of one of the biggest scams in modern literary history.

“Reading The Curse of the Marquis de Sade, with the Marquis, the sabotage of rare manuscript sales, and a massive Ponzi scheme at its center, felt like a twisty waterslide shooting through a sleazy and bizarre landscape. This book is wild.”—Adam McKay, Academy Award–winning filmmaker

Described as both “one of the most important novels ever written” and “the gospel of evil,” 120 Days of Sodom was written by the Marquis de Sade, a notorious eighteenth-century aristocrat who waged a campaign of mayhem and debauchery across France, evaded execution, and inspired the word “sadism,” which came to mean receiving pleasure from pain. Despite all his crimes, Sade considered this work to be his greatest transgression.

The original manuscript of 120 Days of Sodom, a tiny scroll penned in the bowels of the Bastille in Paris, would embark on a centuries-spanning odyssey across Europe, passing from nineteenth-century banned book collectors to pioneering sex researchers to avant-garde artists before being hidden away from Nazi book burnings. In 2014, the world heralded its return to France when the scroll was purchased for millions by Gérard Lhéritier, the self-made son of a plumber who had used his savvy business skills to upend France’s renowned rare-book market. But the sale opened the door to vendettas by the government, feuds among antiquarian booksellers, manuscript sales derailed by sabotage, a record-breaking lottery jackpot, and allegations of a decade-long billion-euro con, the specifics of which, if true, would make the scroll part of France’s largest-ever Ponzi scheme.

Told with gripping reporting and flush with deceit and scandal, The Curse of the Marquis de Sade weaves together the sweeping odyssey of 120 Days of Sodom and the spectacular rise and fall of Lhéritier, once the “king of manuscripts” and now known to many as the Bernie Madoff of France. At its center is an urgent question for all those who cherish the written word: As the age of handwriting comes to an end, what do we owe the original texts left behind?

Joel Warner is a writer and editor whose work has appeared in Esquire, Wired, Newsweek, Men’s Journal, Bloomberg Businessweek, Popular Science, and Slate, among others. He currently serves as managing editor of the investigative news outlet The Lever and previously worked as a staff writer at International Business Times and Westword. He is also co-author of The Humor Code. He lives with his family in Denver, Colorado.

“Joel Warner has written the best kind of history, making the past seem present with wonderful and outrageous characters, a story that jumps propulsively between eras, and a lively exploration of hidden worlds.”—Benjamin Wallace, New York Times bestselling author of The Billionaire’s Vinegar

“Reading The Curse of the Marquis de Sade, with the Marquis, accusations of a massive Ponzi scheme, and the sabotage of rare manuscript sales at its center, felt like a twisty waterslide shooting through a sleazy and bizarre landscape. This book is wild.”—Adam McKay, Academy Award–winning filmmaker

“Joel Warner has written a juicy literary thriller with outstanding characters, ranging from the original sadist to French smuggles to obsessed dermatologists. Reading this book sort of felt like reading a Dan Brown novel—but one where the history is true.”—A.J. Jacobs, New York Times bestselling author of The Puzzler

“Warner’s staggering eye for detail, dazzling connections, encyclopedic historical knowledge and research, and considerate storytelling make The Curse of the Marquis de Sade a tour de force for literature lovers, admirers of the absurd, and anyone who enjoys a great scandal (or many). This book is nothing short of brilliant, and I devoured it whole.”—Erika Krouse, author of Tell Me Everything

“Joel Warner has gifted us a vividly imagined, dazzlingly researched, high-literary detective story. More than a gripping tale, The Curse of the Marquis de Sade is a glance across the last 250 years through the keyhole of the most notorious book ever written.”—Adam Bradley, New York Times bestselling co-author of One Day It’ll All Make Sense

“On the surface, this is a remarkable true story about a most controversial and bizarre work of literature, an epic, picaresque true tale that spans centuries. But it’s also a nonfiction allegory about we humans and what and why and how we choose to value . . . stuff.”—Maximillian Potter, author of Shadows in the Vineyard