Pathogenesis: A History of the World in Eight Plagues (Hardcover) 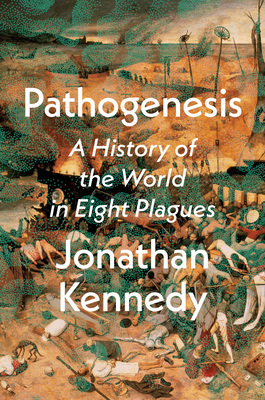 ONE OF THE MOST ANTICIPATED BOOKS OF 2023: The Washington Post, Lit Hub

According to the accepted narrative of progress, humans have thrived thanks to their brains and brawn, collectively bending the arc of history. But in this revelatory book, Professor Jonathan Kennedy argues that the myth of human exceptionalism overstates the role that we play in social and political change. Instead, it is the humble microbe that wins wars and topples empires.

Drawing on the latest research in fields ranging from genetics and anthropology to archaeology and economics, Pathogenesis takes us through sixty thousand years of history, exploring eight major outbreaks of infectious disease that have made the modern world. Bacteria and viruses were protagonists in the demise of the Neanderthals, the growth of Islam, the transition from feudalism to capitalism, the devastation wrought by European colonialism, and the evolution of the United States from an imperial backwater to a global superpower. Even Christianity rose to prominence in the wake of a series of deadly pandemics that swept through the Roman Empire in the second and third centuries: Caring for the sick turned what was a tiny sect into one of the world’s major religions.

By placing disease at the center of his wide-ranging history of humankind, Kennedy challenges some of the most fundamental assumptions about our collective past—and urges us to view this moment as another disease-driven inflection point that will change the course of history. Provocative and brimming with insight, Pathogenesis transforms our understanding of the human story.

Jonathan Kennedy teaches politics and global health at Queen Mary University of London. He has a PhD in sociology from the University of Cambridge.

“Thrilling and eye-opening . . . From neolithic diseases to Covid-19, Jonathan Kennedy explores the enormous role played by some of the tiniest life on earth: the power of plagues in shaping world history.”—Lewis Dartnell, author of The Knowledge

“I love this surprising, learned, fascinating book; it brings human arrogance into sharp relief, reminding us that the real masters of the universe are microbes. Jonathan Kennedy travels through history, unpicking everything we thought we knew; we are but the pawns and playthings of viruses and bacteria. . . . Mind-blowing stuff.”—Cal Flyn, author of Islands of Abandonment

“This book challenges some of the greatest clichés about colonialism and leaves you wondering why you ever gave them the time of day. . . . A revelation.”—Sathnam Sanghera, author of Empireland

“From the fall of Rome to the Spanish conquest of the Americas to the Industrial Revolution, germs have played as much a role in history as guns, generals, and ‘great men.’ In a timely updating of William McNeill’s Plagues and Peoples, Jonathan Kennedy restores the microbes of infectious disease to their rightful place in the story of human evolution and the rise and fall of civilizations. . . . History at its best.”—Mark Honigsbaum, author of The Pandemic Century

“How a virus might have written human history . . . This is a fascinating, readable, and superbly researched account of how infectious diseases have shaped our history, from the Paleolithic Era to Covid.”—David Christian, author of Origin Story

“Kennedy debuts with a virtuoso analysis of the fallout from encounters between deadly viral and bacterial pathogens and human populations that lacked immunity. . . . He marshals a wealth of surprising scholarship in lucid and succinct prose. The result is a fascinating look at history from the perspective of its tiniest protagonists.”—Publishers Weekly, starred review