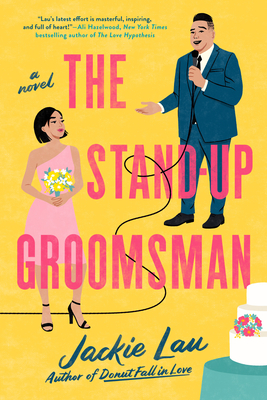 A bridesmaid and groomsman put their differences aside to get their best friends down the aisle in this opposites-attract steamy romantic comedy.

They say to never meet your heroes, but when Vivian Liao's roommate gets engaged to her favorite actor’s costar, she has no choice but to come face-to-face with Melvin Lee again. He's just as funny and handsome as he is on-screen...but he thinks she’s an ice queen and a corporate sellout. It's none of his business how she chooses to live her life, no matter how charismatic he is.

Mel is used to charming audiences as an actor and stand-up comedian, but he can't seem to thaw Vivian’s defenses. If she can ignore the simmering attraction below the surface, so can he. The only thing uniting them is their goal for their friends’ wedding to go off without a hitch.

As they collaborate on wedding cake and karaoke parties, Mel realizes he might have seriously misjudged this bridesmaid, while Vivian discovers the best man might just be as dazzling off-screen as he is on. With the wedding underway, maybe more than one happily ever after is in the future.

Jackie Lau decided she wanted to be a writer when she was in grade two, sometime between penning “The Heart That Got Lost” and “The Land of Shapes.” She later studied engineering and worked as a geophysicist before turning to writing romance novels. She is now the author of over a dozen romantic comedies.

Jackie lives in Toronto with her husband, and despite living in Canada her whole life, she hates winter. When she’s not writing, she enjoys gelato, gourmet donuts, cooking, hiking, and reading on the balcony when it’s raining.

"Lau’s books have some of the best effort-to-emotional-payoff ratios in romance, and that’s before we get into Mel’s buoyant stand-up routines...This is my favorite of Lau’s yet, and, as always, it’s full of delicious food descriptions, delicate emotional landscapes and families who show affection by being relentlessly annoying."—New York Times Book Review

"The Stand-Up Groomsman is the best of opposites-attract romcom: it has two relatable, lovable, layered characters who not only perfectly complement each other, but also understand the other person’s boundaries and wishes and respect them till the very end. It’s complex, steamy, and uniquely charming, with plenty of both hilarious scenes and insightful commentary. Jackie Lau’s latest effort is masterful, inspiring, and full of heart!"—Ali Hazelwood, New York Times bestselling author of The Love Hypothesis

"Jackie Lau's books have a special way of packing both heat and heart. The Stand-Up Groomsman is no exception! Readers will devour this scrumptious, sexy, and dazzling romance."—Amy Lea, author of Set on You

"Jackie Lau’s deft touch weaves together heart and charm in The Stand-Up Groomsman. This opposites attract story featuring Vivian and Mel is filled with appealing (and hilarious) side characters, emotional complexity, and Lau’s trademark humor, resulting in an enchanting and satisfying read."—Lily Chu, author of The Stand-In

“Insightful, clever, and honest, The Stand-Up Groomsman will draw you in and keep you there."—Jayci Lee, author of Booked on a Feeling