The Last White Rose: A Novel of Elizabeth of York (Hardcover) 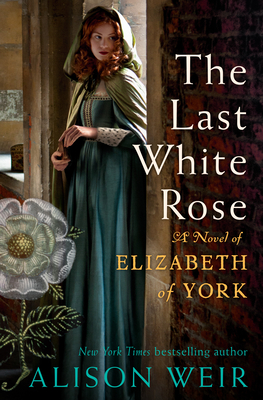 Elizabeth of York is the oldest daughter of King Edward IV. Flame-haired, beautiful, and sweet-natured, she is adored by her family; yet her life is suddenly disrupted when her beloved father dies in the prime of life. Her uncle, the notorious Richard III, takes advantage of King Edward’s death to grab the throne and imprison Elizabeth’s two younger brothers, the rightful royal heirs. Forever afterward known as "the Princes in the Tower," the boys are never seen again. On the heels of this tragedy, Elizabeth is subjected to Richard’s overtures to make her his wife, further legitimizing his claim to the throne. King Richard has murdered her brothers, yet she feels she must accept his proposal.

As if in a fairy tale, Elizabeth is saved by Henry Tudor, who challenges Richard and defeats him at the legendary Battle of Bosworth Field. Following his victory, Henry becomes king and asks Elizabeth to be his wife, the first queen of the Tudor line. The marriage is happy and fruitful, not only uniting the warring houses of Lancaster and York—the red and white roses—but producing four surviving children, one of whom, Henry VIII, will rule the country for the next thirty-six years.

As in her popular Six Tudor Queens series, Alison Weir captures the personality of one of Britain’s most important consorts, conveying Elizabeth of York’s dramatic life in a novel that is all the richer because of its firm basis in history.

Alison Weir is the New York Times bestselling author of the novels Katheryn Howard, The Scandalous Queen; Anna of Kleve, The Princess in the Portrait; Jane Seymour, The Haunted Queen; Anne Boleyn, A King's Obsession; Katherine of Aragon, The True Queen; The Marriage Game; A Dangerous Inheritance; Captive Queen; The Lady Elizabeth; and Innocent Traitor, as well as numerous historical biographies, including Queens of the Crusades; Queens of the Conquest, The Lost Tudor Princess, Elizabeth of York, Mary Boleyn, The Lady in the Tower, Mistress of the Monarchy, Henry VIII, Eleanor of Aquitaine, The Life of Elizabeth I, and The Six Wives of Henry VIII. She lives in Surrey, England.

Praise for The Last White Rose

“Weir tells the story through Elizabeth’s eyes, narrating it in the first person. As with all her books, it is superbly readable and engaging. I doubt we will ever tire of the Tudors, not while we have novelists like Weir to bring them to life.”—Historical Novels Society

“Weir provides a realistic feel for the worry Elizabeth’s family experiences as their fortunes shift, especially after Richard III usurps the throne following King Edward’s death, and her brothers disappear while in his custody. The story gives a coherent, convincing picture of the treacherous political climate and its many players and reveals why Elizabeth plots to marry Henry Tudor. . . . . Weir’s thorough approach to her subject is impressive, as is the sumptuously recreated atmosphere of late-medieval royal life.”—Booklist

“Like its predecessors, this is a detailed and convincing portrait of an extraordinary life. Taken as a whole, this series is a serious achievement.”—The Times

“Weir delivers engaging historical characters, filling the white spaces of their lives with believable interests, convincing motivation, and realistic daily routines. . . . The conversations are sparkling, gripping and word-perfect. . . . This masterly novel seamlessly blends history into the story’s fabric. A superb read and a remarkable end to a brilliant series.”—Historical Novel Society

“Engaging and deeply researched . . . [Alison] Weir brings her expertise of the Tudor era to bear with rich detail and historical perspective on politics and religion, and the many intelligent conversations between Katharine and Henry VIII add to the charm. With a mercurial, captivating king as hook, Weir serves up a sharp and lucid blend of grim fact and stylish fiction.”—Publishers Weekly

“A solid choice for Tudor enthusiasts looking for a well-researched, entertaining novel.”—Library Journal

“With Katharine Parr, The Sixth Wife . . . Weir cements her well-deserved renown as a novelist and historian who elevates both genres far beyond expectation. . . . . Perhaps most poignant and memorable is Weir’s creative entry into the depths of a Tudor queen’s heart and mind. Katharine’s personality seems no mere fantasy, but an honest and empathic embrace of feminine power and vulnerability that is deeply relatable for women of every historical era.”—Bookreporter

“This brilliant series has brought Henry VIII’s six wives to life as never before. This novel will enthrall and inspire, just as much as it will break your heart.”—Tracy Borman, author of The Private Lives of the Tudors