In Memoriam: A novel (Hardcover) 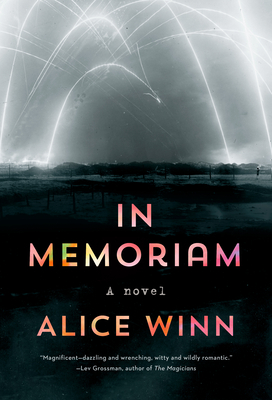 A haunting, virtuosic debut novel about two young men who fall in love during World War I. • “Dazzling and wrenching, witty and wildly romantic, with echoes of Brideshead Revisited and Atonement.” —Lev Grossman, best-selling author of The Magicians

It’s 1914, and World War I is ceaselessly churning through thousands of young men on both sides of the fight. The violence of the front feels far away to Henry Gaunt, Sidney Ellwood and the rest of their classmates, safely ensconced in their idyllic boarding school in the English countryside. News of the heroic deaths of their friends only makes the war more exciting.

Gaunt, half German, is busy fighting his own private battle--an all-consuming infatuation with his best friend, the glamorous, charming Ellwood--without a clue that Ellwood is pining for him in return. When Gaunt's family asks him to enlist to forestall the anti-German sentiment they face, Gaunt does so immediately, relieved to escape his overwhelming feelings for Ellwood. To Gaunt's horror, Ellwood rushes to join him at the front, and the rest of their classmates soon follow. Now death surrounds them in all its grim reality, often inches away, and no one knows who will be next.

An epic tale of both the devastating tragedies of war and the forbidden romance that blooms in its grip, In Memoriam is a breathtaking debut.

ALICE WINN grew up in Paris and was educated in the UK. She has a degree in English literature from Oxford University. She lives in Brooklyn.

“A central relationship so utterly convincing that it will leave you bereft. Visceral, heartbreaking but full of heart, this is a masterpiece of war literature.”
—Hanna Jameson, author of The Last

“In Memoriam is a gripping and unsentimental love story that brings the First World War to life in a vividly new way. Alice Winn is a truly skilful writer, depicting her main characters, Gaunt and Ellwood, and the many layers of their relationship, beautifully, with real care and insight. She is unsparing in her depiction of the conflict in which they find themselves—powerfully evoking both the horrors of trench warfare and the devastating impact it had on those involved. She also brilliantly explores how the English public school system, with its casual brutalities and glorification of battle, was irrevocably intertwined with the war. An unforgettable novel, one I stayed up all night to finish, with characters I loved almost as much as they loved each other.”
—Joanna Quinn, author of The Whalebone Theatre

“A searing and harrowing novel about the love story between two young men played out against a backdrop of the horrors of World War I. The writing was so visceral and intense, I honestly felt as if I was in the trenches with them, and I’m still thinking about the book weeks after reading it. An incredible debut.”
—Nikki Smith, author of All In Her Head

“An astonishingly confident and impressive debut, this love story set in the First World War is shocking, brutal, and memorable. It left me shaken—and very impressed.”
—Lucy Atkins, author of Magpie Lane

“It’s hard to believe that In Memoriam is a debut novel as it’s so assured, affecting and moving. Alice Winn has written a devastating love story between two young men that moves from the sheltered idyll of their public school to the unspeakable horrors of the Western Front during the First World War. Gaunt and Ellwood will live in your mind long after you’ve closed the final pages.”
—Maggie O’Farrell, author of The Marriage Portrait

“In Memoriam is magnificent—dazzling and wrenching, witty and wildly romantic, with echoes of Brideshead Revisited and Atonement. I loved it.”
—Lev Grossman, author of The Magicians

“Alice Winn has pulled off a remarkable feat in making these men and the horrors of the First World War come so viscerally alive. It was like looking at a black and white photograph which has been colourised, and suddenly you understand that these shadowy people from the past also dreamed and cried and breathed just as we do now. I was completely absorbed, moved, and transported.”
—Claire Fuller, award-winning author of Unsettled Ground

“I read through the night to finish this blistering debut, too feverishly engrossed to sleep. When was the last time characters in a novel seemed so real to me, so cherishable, so alive? Alice Winn has made familiar history fresh; no account of the First World War has made me feel so vividly its horror, or how irrevocably it mutilated the world. That In Memoriam is also an extraordinary love story is a sign of Winn’s wild ambition and her prodigious gifts: this is a novel that claims both beauty and brutality, the whole range of human life.”
—Garth Greenwell, author of Cleanness and What Belongs to You

“Alice Winn offers a fresh look at a subject many of us believe we know well. A tender story as much about love as it is about war.”
—Rowan Hisayo Buchanan, author of Harmless Like You

“A superb debut . . . Winn stages excellent action scenes . . . but it is the men’s love for each other that resonates. This is a remarkable achievement.”
—Publishers Weekly (starred)

“Powerful, deeply imagined . . . One of the wonderful aspects of Winn’s debut is that, just when you think you’ve settled into a tender literary novel, its revelations and surprises begin to unfurl at an impressive pace that reads more like a thriller . . . Winn’s battle scenes are hair-raising and terrifying, but her portraits of Sidney and Henry are intimate and evocative . . . A love story that’s hard to forget.”
—Kirkus Reviews (starred)

“Winn’s finely accomplished debut novel is a rare thing, an intoxicating romance and an impossible-to-put-down war story in one . . . Winn captures the war as it looked, sounded, and smelled, but the ultimate death-defying acts here are in literature, breathtaking bravery, and love.”
—Annie Bostrom, Booklist (starred)