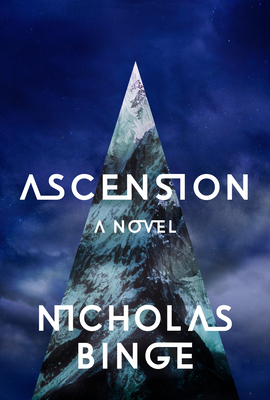 An enormous snow-covered mountain has appeared in the Pacific Ocean. No one knows when exactly it showed up, precisely how big it might be, or how to explain its existence. When Harold Tunmore is contacted by a shadowy organization to help investigate, he has no idea what he is getting into as he and his team set out for the mountain.

The higher Harold’s team ascends, the less things make sense. Time moves differently, turning minutes into hours, and hours into days. Amid the whipping cold of higher elevation, the climbers’ limbs numb and memories of their lives before the mountain begin to fade. Paranoia quickly turns to violence among the crew, and slithering, ancient creatures pursue them in the snow. Still, as the dangers increase, the mystery of the mountain compels them to its peak, where they are certain they will find their answers. Have they stumbled upon the greatest scientific discovery known to man or the seeds of their own demise?

Framed by the discovery of Harold Tunmore’s unsent letters to his family and the chilling and provocative story they tell, Ascension considers the limitations of science and faith and examines both the beautiful and the unsettling sides of human nature.

Nicholas Binge lives and teaches in Edinburgh. This is his first book in the U.S.

"Thrilling. . .full of exploration and intriguing thoughts about the true nature of life on Earth. . .An exciting story where the undiscovered wonders of Earth prove as exciting as those out in the galaxy."—Library Journal

"Binge has written a profound and elegiac story that examines science, faith and the concept of humanity itself — what it means to live and die, to yearn and strive, and all the spaces in between. I will be thinking about this one for a long time!" —Sunyi Dean, bestselling author of The Book Eaters

"A science fiction mystery that uses a classical concept, but with a beating heart. Both the science and the suspense are perfection, all held together by a robust emotional core. I enjoyed it immensely.” —Tade Thompson, award-winning author of Rosewater and Far from the Light of Heaven

"Exerts an irresistible pull, setting not only a scientific search in motion but also a transcendent quest to unravel mysteries of existence and human meaning. Suspenseful yet also deeply contemplative in turns, this is a novel that spins the mind and asks us to step with it into the unworldly.” —Pitchaya Sudbanthad, author of Bangkok Wakes to Rain

"A scintillating speculative mystery, a harrowing survival adventure, and a stirring love story—Nicholas Binge's Ascension is a mountain of a novel. I was whipping through the pages until I reached its peak.”—Katie Williams, author of Tell the Machine Goodnight