Kingbird Highway: The Story of a Natural Obsession That Got a Little Out of Hand (Paperback) 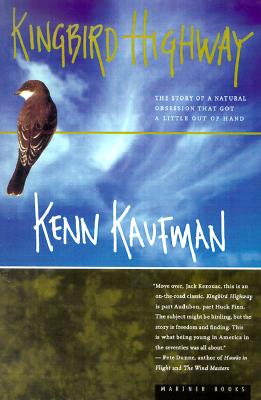 By Kenn Kaufman
$14.00
This book is out of stock and awaiting a reprint. Please check back later for availability changes.

At sixteen, Kenn Kaufman dropped out of the high school where he was student council president and hit the road, hitching back and forth across America, from Alaska to Florida, Maine to Mexico. Maybe not all that unusual a thing to do in the seventies, but what Kenn was searching for was a little different: not sex, drugs, God, or even self, but birds. A report of a rare bird would send him hitching nonstop from Pacific to Atlantic and back again. When he was broke he would pick fruit or do odd jobs to earn the fifty dollars or so that would last him for weeks. His goal was to set a record - most North American species seen in a year - but along the way he began to realize that at this breakneck pace he was only looking, not seeing. What had been a game became a quest for a deeper understanding of the natural world. KINGBIRD HIGHWAY is a unique coming-of-age story, combining a lyrical celebration of nature with wild, and sometimes dangerous, adventures, starring a colorful cast of characters.

"An arresting glimpse into one of America's quirkiest subcultures." Outside