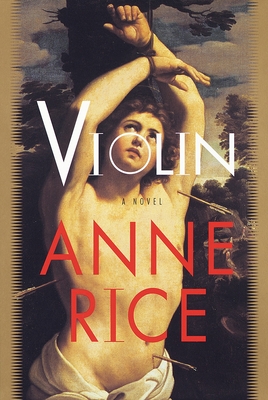 By Anne Rice
$25.95
It's complicated. Try to order and we'll be in touch about availability. Or you can try to purchase at bookshop.org/shop/nowhere

In the grand manner of Interview with the Vampire, Anne Rice's new novel moves across time and the continents, from nineteenth-century Vienna to a St. Charles Greek Revival mansion in present-day New Orleans to the dazzling capitals of the modern-day world, telling a story of two charismatic figures bound to each other by a passionate commitment to music as a means of rapture, seduction, and liberation.

At the novel's center: a uniquely fascinating woman, Triana--who once dreamed of becoming a great musician--and the demonic fiddler Stefan, tormented ghost of a Russian aristocrat, who begins to prey upon her, using his magic violin first to enchant, then to dominate and draw her into a state of madness through the music she loves.

But Triana understands the power of the music perhaps even more than does Stefan--and she sets out to resist Stefan and to fight not only for her sanity but for her life. The struggle draws them both into a terrifying supernatural realm where they find themselves surrounded by memories, by horrors, and by overwhelming truths. Battling desperately, they are at last propelled towards the novel's astonishing and unforgettable climax.

Violin is crowded with the history, the drama, the invention, and the romantic intensity that have become synonymous with Anne Rice at her incomparable best.

Anne Rice is the author of eighteen books. She lives in New Orleans with her husband, the poet and painter Stan Rice.

"A PASSIONATE MIXTURE OF EARTHLY FEARS AND SUPERNATURAL TERRORS."
--The Baltimore Sun

"[AN] ABSORBING NOVEL THAT TAKES THE READER ON A SUSPENSEFUL JOURNEY THROUGH TIME, PLACE, AND MIND . . . The instrument of the title belongs to a ghost, the brooding 19th-century aristocrat Stefan, who ventures to 20th-century New Orleans to brew up mischief and seek release from his torment. Told from the point of view of Triana, the humane woman drawn into Stefan's nefarious plot, the tale charts two lives touched by tragedy and alienation. . . . A rich, detailed literary symphony."
--The Cleveland Plain Dealer

"THE TALE OF A DEVILISHLY HAUNTING STRADIVARIUS . . . HER BEST WORK SINCE 1990'S THE WITCHING HOUR."
--The Dallas Morning News

"FULL OF EVOCATIVE IMAGERY . . . THIS IS A BOOK THAT UNDRESSES ITS CHARACTERS LAYER BY LAYER."
--USA Today