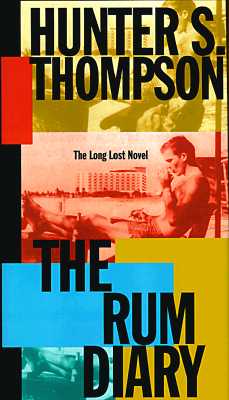 By Hunter S. Thompson
Email or call for price.
It is unlikely that we can get a hold of this title. Please email orders@nowherebookshop.com before placing an order.

"The Rum Diary" was begun in 1959 by then-twenty-two-year-old Hunter S. Thompson. It was his first novel, and he told his friend, the author William Kennedy, that "The Rum Diary" would "in a twisted way...do for San Juan what Ernest Hemingway's "The Sun Also Rises" did for Paris." In Paul Kemp, the novel's hero, there are echoes of the young Thompson, who was himself honing his wildly musical writing style as one of the "ill-tempered wandering rabble" on staff at the "San Juan Daily News" at the time. "I shared a dark suspicion," Kemp says, "that the life we were leading was a lost cause, we were all actors, kidding ourselves along on a senseless odyssey. It was the tension between these two poles -- a restless idealism on one hand and a sense of impending doom on the other -- that kept me going."

"The Rum Diary" is a brilliantly tangled love story of jealousy, treachery & violent alcoholic lust in the Caribbean boomtown that was San Juan, Puerto Rico, in the late 1950s. "It was a gold rush," says the author. "There were naked people everywhere and we all had credit."

Puerto Rico was an unspoiled tropical paradise in those years -- before Castro, before JFK, before civil rights & moonwalks & flower power & Vietnam & protests & even before drugs -- but the "San Juan Daily News" was a vortex & a snakepit of all the corrupt new schemes & plots & greedmongers who swarmed in. Paul Kemp, "The Rum Diary"'s narrator, speaks for the unfocused angst of those times: "In a sense I was one of them -- more competent than some and more stable than others -- and in the years that carried that ragged banner I was seldom unemployed. Sometimes I worked for three newspapers at once. I wrote adcopy for new casinos and bowling alleys, I was a consultant for the cockfighting syndicate, an utterly corrupt high-end restaurant critic, a yachting photographer and a routine victim of police brutality. It was a greedy life and I was good at it. I made some interesting friends, had enough money to get around, and learned a lot about the world that I could never have learned in any other way."