Life in the City of Dirty Water: A Memoir of Healing (Hardcover) 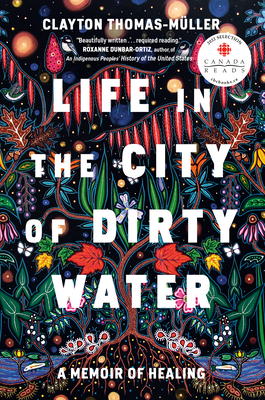 A gritty and inspiring memoir from renowned Cree environmental activist Clayton Thomas-Muller, who escaped the world of drugs and gang life to take up the warrior’s fight against the assault on Indigenous peoples’ lands—and eventually the warrior’s spirituality.

There have been many Clayton Thomas-Mullers: The child who played with toy planes as an escape from domestic and sexual abuse, enduring the intergenerational trauma of Canada's residential school system; the angry youngster who defended himself with fists and sharp wit against racism and violence, at school and on the streets of Winnipeg and small-town British Columbia; the tough teenager who, at 17, managed a drug house run by members of his family, and slipped in and out of juvie, operating in a world of violence and pain.

But behind them all, there was another Clayton: the one who remained immersed in Cree spirituality, and who embraced the rituals and ways of thinking vital to his heritage; the one who reconnected with the land during summer visits to his great-grandparents' trapline in his home territory of Pukatawagan in northern Manitoba.

And it's this version of Clayton that ultimately triumphed, finding healing by directly facing the trauma that he shares with Indigenous peoples around the world. Now a leading organizer and activist on the frontlines of environmental resistance, Clayton brings his warrior spirit to the fight against the ongoing assault on Indigenous peoples' lands by Big Oil.

Tying together personal stories of survival that bring the realities of the First Nations of this land into sharp focus, and lessons learned from a career as a frontline activist committed to addressing environmental injustice at a global scale, Thomas-Muller offers a narrative and vision of healing and responsibility.

CLAYTON THOMAS-MULLER is a member of the Treaty #6 based Mathias Colomb Cree Nation also known as Pukatawagan located in Northern Manitoba, Canada. He is a campaigner for 350.org, a global movement that's responding to the climate crisis. He has campaigned on behalf of Indigenous peoples around the world for more than 20 years, working with the Indigenous Environmental Network, Black Mesa Water Coalition, Global Justice Ecology Project, and Bioneers, among others. Clayton has led Indigenous delegations to lobby United Nations bodies, including the UN Framework Convention on Climate Change, UN Earth Summit (Johannesburg, 2002 and Rio+20, 2012) and the UN Permanent Forum on Indigenous Issues. He has coordinated and led delegations of Indigenous peoples to lobby government in Washington, DC, Ottawa, and the European Union (Strasbourg and Brussels).

“[A] brave story. . . . Thomas-Muller not only writes about his upbringing in Winnipeg, which translated from Cree means ‘dirty water,’ he unravels how he began healing by using prayer and participating in his culture. . . . [Life in the City of Dirty Water] is a deep account of survivance against systems of oppression, intergenerational trauma and addiction, and about finding healing and highlighting his Cree experience.”
—The Tyee

“In [Thomas-Muller’s] latest memoir, Life in the City of Dirty Water, he painfully and bravely reveals his journey through catastrophic pain, unbelievable odds and a reconnection to land, language and culture through his work defending Mother Earth. . . . His memoir is an artefact of transformation—a transformation of a hardened youth who endured more tragedy and danger than most of us can imagine into a defender of people, land and the notion that all species and systems are connected.”
—Winnipeg Free Press

“From selling drugs in a gang to organizing environmental campaigns against oil and gas extraction, the stories of Thomas-Muller’s life defy any one category to paint a complex picture of what it is to be a Cree man in Canada.”
—The Globe and Mail

“[In Life in the City of Dirty Water,] Thomas-Muller finds hope in the growing movement of climate change activism, especially by children.”
—Vancouver Sun

“This book is an adventure story in every way. A life of drug dealers and crackhouses and guns; leaving that behind for a remarkable time of spiritual and personal growth; and there’s the ongoing adventure of working desperately to protect the planet and its sacred places. Clayton Thomas-Müller relates these adventures in ways that will help everyone through unfamiliar terrain—he’s a trustworthy guide and an authentic storyteller. In a moment when Indigenous people around the world are coming to the very fore of the most crucial fights, this volume will broaden your understanding in powerful ways. And you won’t forget its scenes any time soon.”
—Bill McKibben, co-founder of 350.org and author of Earth and Oil and Honey

“Clayton Thomas-Müller—Cree poet and environmental warrior dedicated to decolonization—has crafted an awesome, lyrical memoir that captures the experiences of urban Indigenous youth facing poverty, drugs, alcohol, domestic violence, and juvenile detention. Most, like Clayton, inherited the intergenerational trauma of residential schools. Clayton found a way to escape trauma and poverty in order to fight for his people. This beautifully written book is required reading for everyone who cares about justice for the survivors of genocide who continue to survive in colonized conditions. It offers a path to liberation that may also be the way to saving the earth and humanity itself.”
—Roxanne Dunbar-Ortiz, author of An Indigenous Peoples’ History of the United States

“The one thing that Clayton is able to do is he connects the past with the future. I think that’s what sets it apart from all the other books. We have an uncertain future ahead of us and he really takes what he’s learned from his past, his culture, his spirituality, his ancestors—and all those stories of creation and spirituality that make us a whole community. It makes the First Nations and all the people of Canada whole. It’s that wholeness that’s going to bring us forward. So I feel like Life in the City of Dirty Water really was able to do that better than any other book. It shows us a pathway forward as we try to deal with upcoming trauma that is undoubtedly going to happen as the climate changes.”
—Suzanne Simard, bestselling author of Finding the Mother Tree (Canada Reads)