More Than This (Hardcover) 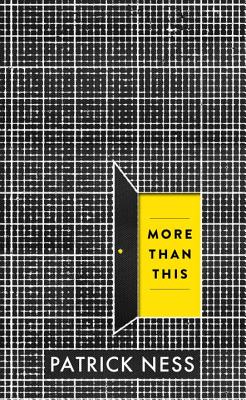 By Patrick Ness
$19.99
This book is out of stock and awaiting a reprint. Please check back later for availability changes.

From two-time Carnegie Medal winner Patrick Ness comes an enthralling and provocative new novel chronicling the life — or perhaps afterlife — of a teen trapped in a crumbling, abandoned world.

A boy named Seth drowns, desperate and alone in his final moments, losing his life as the pounding sea claims him. But then he wakes. He is naked, thirsty, starving. But alive. How is that possible? He remembers dying, his bones breaking, his skull dashed upon the rocks. So how is he here? And where is this place? It looks like the suburban English town where he lived as a child, before an unthinkable tragedy happened and his family moved to America. But the neighborhood around his old house is overgrown, covered in dust, and completely abandoned. What’s going on? And why is it that whenever he closes his eyes, he falls prey to vivid, agonizing memories that seem more real than the world around him? Seth begins a search for answers, hoping that he might not be alone, that this might not be the hell he fears it to be, that there might be more than just this. . . .

Patrick Ness is the author of the critically acclaimed and best-selling Chaos Walking trilogy, as well as the Carnegie Medal–winning A Monster Calls, inspired by an idea from Siobhan Dowd. Among the numerous awards he has received are the Guardian Children’s Fiction Prize, the Booktrust Teenage Prize, and the Costa Children’s Book Award. Born in Virginia, he lives in London.

This haunting and consistently surprising novel raises deep questions about what it means to be alive, but it doesn’t try to console readers with easy or pat answers. ... . A delicate balance between dystopian survival and philosophical grappling means that many different kinds of readers should appreciate the story.
—School Library Journal (starred review)

Ness brilliantly plays with contrasts: life and death, privacy and exposure, guilt and innocence. In characteristic style, the author of the Chaos Walking trilogy delves into the stuff of nightmares for an existential exploration of the human psyche.
—Kirkus Reviews (starred review)

Ness’ knack for cliff-hangers, honed in the Chaos Walking series, remains strong, while the spare, gradual, anytime, anyplace quality of the story recalls A Monster Calls... Ness has crafted something stark and uncompromising.
—Booklist

This complex, genrebending book opens with Seth’s violent drowning death at sea, described in such spare but devastating detail that readers may feel themselves gasping for a breath as Seth draws his last. ... Ness subverts familiar sci-fi/survival tropes and storytelling conventions, leaving readers with an ambiguous ending... The thematic explorations of the nature of reality and the afterlife offer some heady discussion fodder, while the nail-biting tension and high-stakes action sequences make this an easy sell to the legions of dystopia fans as well.
—Bulletin of the Center for Children's Books

Ness leads readers on an adventure into a world that astounds and amazes. ... Ness captures the mind of a teenager perfectly. It is a fast-paced journey that even reluctant readers will pursue...
—VOYA

Ness is not only a good storyteller but an interesting prose stylist, and his latest effort is as provocative as ever.
—The Horn Book

Books are often described as ‘mind-blowing,’ but this is one of the few books in which, while reading it, I have exclaimed aloud, ‘Oh. My. God.’ on multiple occasions. I won’t tell you anything else about it. Just read it.
—John Green

It is a gorgeous story with masterful pacing and unforgettable passages.
—The Boston Globe

At times, More Than This is like a literary experiment that only by the grace and dedication of its creator resulted in a novel proper, but in the hands of a poised, perfectionist prose-smith like Patrick Ness, it’s rarely less than life-affirming. ... The author’s newest novel is riveting, edge-of-your-reading-seat stuff from beginning to end.
—Tor.com

Artsy, creepy, and full of psychological suspense... Ness specializes in writing post-apocalyptic worlds where things are rarely as they seem. ... The dizzying ending brings the characters to the narrow edge between inevitable outcomes and hope for second chances — and challenges readers to form their own conclusions.
—BookPage

[A] YA game-changer. It's provocative and philosophical, sweet and darkly funny, and destined to be discussed and debated. And there's not a vampire or a zombie lurking anywhere in its dystopian landscape.
—Minneapolis Star Tribune