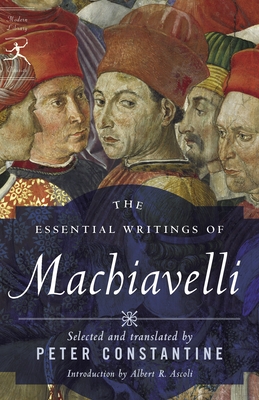 FINALIST--2008 PEN TRANSLATION PRIZE
In The Essential Writings of Machiavelli, Peter Constantine has assembled a comprehensive collection that shows the true depth and breadth of a great Renaissance thinker. Refreshingly accessible, these superb new translations are faithful to Machiavelli’s original, beautifully crafted writings.

The volume features essays that appear in English for the first time, such as “A Caution to the Medici” and “The Persecution of Africa.” Also included are complete versions of the political treatise, The Prince, the comic satire The Mandrake, The Life of Castruccio Castracani, and the classic story “Belfagor”, along with selections from The Discourses, The Art of War, and Florentine Histories. Augmented with useful features–vital and concise annotations and cross-references–this unique compendium is certain to become the standard one-volume reference to this influential, versatile, and ever timely writer.

“Machiavelli's stress on political necessity rather than moral perfection helped inspire the Renaissance by renewing links with Thucydides and other classical thinkers. This new collection provides deeper insight into Machiavelli’s personality as a writer, thus broadening our understanding of him.”
–Robert D. Kaplan, author of Warrior Politics: Why Leadership Demands a Pagan Ethos

“If one were to assign a single edition of Machiavelli's works, this most certainly would be it.”
–John P. McCormick, professor, department of political science, University of Chicago

Niccolò Machiavelli (1469-1527) was born in Florence. He served the Florentine republic as secretary and second chancellor, but was expelled from public life when the Medici family returned to power in 1512. His most famous work, The Prince, was a written attempt to reingratiate himself with the Medicis and return to politics.

Peter Constantine is the recipient of a PEN Translation Prize and a National Translation Award. His Modern Library translations include Voltaire’s Canidide, Tolstoy’s The Cossacks, and Gogol’s Taras Bulba. He lives in New York City.