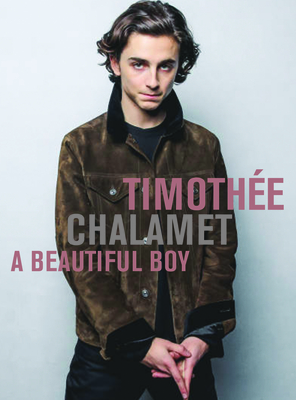 By Editors Of Plexus
$16.95
Coming Soon - Available for Pre-Order Now

Since 2017, Timoth e Chalamet, who Vogue termed 'the Internet's collective boyfriend', has been gracing our screens and social media feeds with that distinctive face of his. But how did it all begin for Timmy? What inspired the mass millennial adoration otherwise known as 'Chalamania'? And what does the future have in store for this young actor?

This book takes the reader on an illustrated journey through Chalamet's life and acting career htus far. Beginning with tales of his childhood, the author sets the scene before taking us through the early TV and film debuts that led to Timoth e's breakthrough roles in Lady Bird, Call Me By Your Name, and his success in Beautiful Boy, which saw him nominated for a Golden Globe Award for Best Supporting Actor.

In the words of Jennifer Lawrence, Timoth e is the perfect combination of 'talented and hot', so it really is no wonder that he is being lined up as the dream boy. And yet, Chalamet is no traditional heartthrob. In an interview with Harry Styles, Timoth e claimed that 'There isn't a specific notion, or jean size, or muscle shirt, or affectation, or eyebrow raise, or dissolution, or drug use that you have to take part in to be masculine. It's exciting. It's a brave new world.' Far from embodying the patriarchal idea of manhood, Timoth e Chalamet is representing a new version of masculinity and is inadvertently taking on an important role in a changing film industry that stretches beyond his roles on screen.