The Mystery of the Grail: Initiation and Magic in the Quest for the Spirit (Paperback) 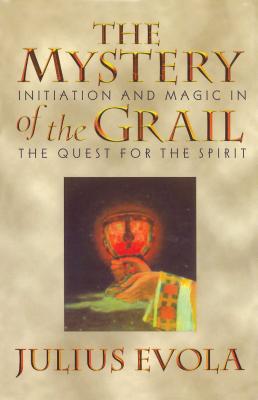 In this important study of the meaning of the Grail, one of Europe's greatest esoteric philosophers discloses the pre-Christian and initiatic sources of this symbolic motif that is so central to Western mythology and culture. He demonstrates how the main features of the legend are from an older tradition analogous to the great heroic sagas and cycles of the North, and that the Grail itself is a symbol of initiation. Evola uncovers the hidden meaning in the often surreal adventures of the knights who searched for the Grail, interpreting them as inner experiences and tests for the seeker. He also explores the history of the myth in the Middle Ages, its use by the Knights Templar and the Cathars, its legacy during the decline of the Holy Roman Empire, and its links with Rosicrucianism, alchemy, and Masonry.

This excursion into the realm of the Grail throws new light on an endlessly fascinating subject.

A controversial philosopher and critic of modern Western civilization, Julius Evola (1898-1974) wrote widely on Eastern religions, alchemy, sexuality, politics, and mythology. Inner Traditions has published his Eros and the Mysteries of Love: The Metaphysics of Sex, The Yoga of Power, The Hermetic Tradition, Revolt Against the Modern World, The Mystery of the Grail and Ride The Tiger.

"Evola uses the bow, hitting his target with consummate accuracy and illuminating in a few words a whole area of thought hitherto unrecognized by most of us."
— Gnosis