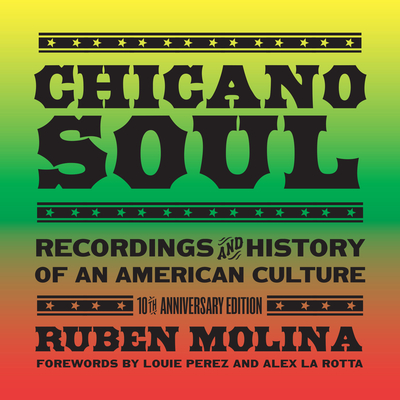 By Ruben Molina, Louie Perez (Foreword by), Alex Larotta (Foreword by)
$34.95
This book is out of stock and awaiting a reprint. Please check back later for availability changes.

In 2007, Ruben Molina published the first-ever history of Mexican-American soul and R&B music in his book, Chicano Soul: Recordings and History of an American Culture. Ten years later, Chicano Soul remains an important and oft-referenced study of this vital but often overlooked chapter of the greater American musical experience. Chicano soul music of the 1950s and 1960s still reverberates today, both within Chicano communities and throughout many musical genres. Molina tells the story of the roots of Chicano soul, its evolution, and its enduring cultural influence. "Brown-eyed soul" music draws on 1950s era jazz, blues, jump blues, rock n' roll, Latin jazz, and traditional Mexican music such as ranchera, norte o, and conjunto music. With its rare and gorgeous photos, record scans, concert bills, and impressive discography (to say nothing of its rich oral histories/interviews), it is one of those rare works that speaks to both general and academic audiences. As a teen in the 1960s, Ruben Molina used to take a bus to Hollywood to shop for records, and his passion for vinyl never waned. As a dedicated community historian, Molina interviewed dozens of the artists whose music he loves. Much of Chicano soul music's recent recognition and renaissance can be traced directly to Molina. He has deejayed with the Southern Soul Spinners crew since 2010.