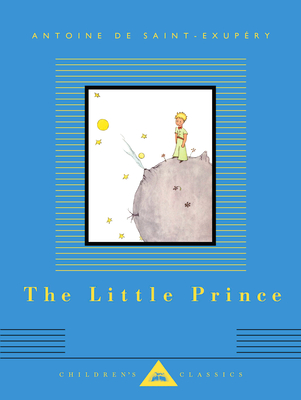 A beautiful hardcover edition of one of the bestselling classic children's stories in the world--long cherished by children and adults alike.

Written during World War II, The Little Prince tells of the friendship between the narrator, an aviator stranded in the Sahara desert, and a mysterious boy he encounters there. Ruler of a tiny asteroid of which he is the only inhabitant, the Little Prince chats disarmingly about his curious adventures in space and since arriving on earth; of his distant home; and of his love for a beautiful and capricious rose, to whom he longs to return. A moving and deceptively simple tale, it was described by Antoine de Saint-Exupéry as a children's story for adults, and it works on several levels as an allegory of his own life and of the human condition. Children love it for its deadpan fantasy, for its sense of baffled amusement at the grown-up world, and for the author's whimsical watercolour illustrations, which are an integral part of the book.

Antoine de Saint-Exupéry, born in Lyon in 1900, came from an impoverished French aristocratic family. A pioneering aviator, he did his military service in the French air force and later became a commercial pilot, helping to establish airmail routes to South America and North Africa. A number of his novels were inspired by his love of flying, and his memoir, Wind, Sand and Stars (1939) includes an account of his air crash in the Libyan desert, which forms the background for The Little Prince. He rejoined the French air force at the start of World War II and after the fall of France spent three years in New York, where he wrote The Little Prince. In 1943, in spite of declining health, he joined the Free French Air Force in North Africa and never returned from his last reconnaissance mission over France in 1944.