Once Upon a Time in Shaolin: The Untold Story of Wu-Tang Clan's Million-Dollar Secret Album, the Devaluation of Music, and America's New Public Enemy No. 1 (Paperback) 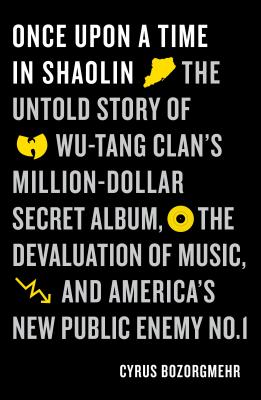 The untold story of the world's most controversial album---a surreal tale of secret recordings, the Wu-Tang Clan, baffled customs agents, the world's most hallowed art institutions, and a villain of comic book proportions: Martin Shkreli.

In 2007, the innovative young Wu-Tang producer, Cilvaringz, took an incendiary idea to his mentor the RZA. They felt that the impact of digitization threatened the sustainability of the record industry and independent artists, while shifting the perception of music from treasured works of art to disposable consumer products.

Together they conceived a statement so radical that it would unleash a torrent of global debate---a sole copy of an album in physical form, encased in gleaming silver and sold through an auction house for millions as a work of contemporary art.

The execution of this plan raised a number of complex questions: Would selling an album for millions be the ultimate betrayal of music? How would fans react to an album that's sold on the condition that it could not be commercialized? And could anyone ever justify the selling of the album to the infamous Martin Shkreli?

As headlines flashed across the globe, the mystery only deepened. Opinions were sharply divided over whether this was high art or hucksterism---quixotic idealism or a cynical cash grab. Was it a noble act of protest, an act of cultural vandalism, an obscene symbol of greed, a subversive masterpiece, a profound mirror for our time, or a joker on capitalism's card table?

As senior adviser to the project, Cyrus Bozorgmehr is uniquely placed to unlock the secrets behind the album and tell the full, unadulterated story.

With explosive revelations about backroom plans made public for the first time, Once Upon a Time in Shaolin charts the album's journey from inception to disruption in vivid style.

An extraordinary adventure that veers between outlandish caper and urgent cultural analysis. Once Upon a Time in Shaolin twists and turns through the mayhem and the mischief, while asking profound questions about our relationship with art, music, technology, and ultimately ourselves.

CYRUS BOZORGMEHR was the senior adviser on the Once Upon a Time in Shaolin project and worked alongside Wu-Tang Clan's RZA and producer Cilvaringz. He lives in Marrakech, Morocco.

“An epic battle between colorful, creative maniacal heroes and one of the blandest beta-villains of our time. I couldn’t put it down.” —Patton Oswalt, comedian and bestselling author of Silver Screen Fiend

“The rollicking narrative of the rap group Wu-Tang Clan’s notorious efforts to create an album that, rather than being mass marketed, would be valued like a work of art… But the book also invokes much deeper themes. It’s about the group’s efforts to rectify the fact that file-sharing and streaming business models have rendered it nearly impossible for most musicians to make money from their work.” —Strategy+Business

"Hold on tight...it's a rollercoaster.... Money, art, danger, intrigue, glamour. It’s all here, and with Bozorgmehr by our side, we know we are going to experience it all.... [A] breakneck dive into a world we never thought we’d be privy to." —PopMatters

"[An] utterly candid work...Bozorgmehr's stirring account gives readers the insider's view of musical outlaws who possessed the best intentions of elevating hip-hop from its street moorings to more stylish, chic surroundings, and whose efforts exploded in a crisis of bad media coverage and soulless pharmaceutical drug merchants." —Publishers Weekly

“[Bozorgmehr's] insider’s knowledge of the process drives this fascinating story, full of suspense and surprises. A detailed, compelling look at of one of the music business’ most interesting stories.” —Booklist

"A fantastic, gripping read from start to finish, Once Upon a Time in Shaolin takes us to the heart of the action and shows us what really went on behind closed doors with Wu Tang's most controversial album. A must-read for hip-hop fans and for anyone who wants the inside story into one of music's most talked-about events." —Paul Edwards, author of The Concise Guide to Hip-Hop Music, How to Rap, and How to Rap 2

"Once Upon a Time in Shaolin offers a front-row seat as Wu Tang Clan’s maverick, idealistic attempt at a statement on the current state of the music industry and the symbiosis of art and money backfires, turning into a surreal caper featuring monumental ambitions, even more monumental egos, Bill Murray, the FBI, replica AK-47s, and, yes, arguably the most hated man in America. It’s a music book unlike any other.” —Paul Fischer, author of A Kim Jong-Il Production