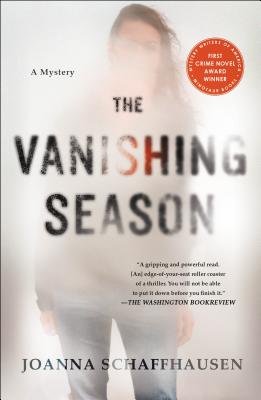 This is book number 1 in the Ellery Hathaway series.

“Officer Ellery Hathaway is the ultimate damaged character. Kidnapped at age 14 and tortured by a serial killer before being rescued by FBI agent Reed Markham, Hathaway is now a woman who fiercely protects her privacy. But, every year on her birthday, three people have disappeared, and no one, including the sheriff, believes they are connected. To get to the bottom of the mystery, Hathaway reaches out to Markham. The Vanishing Season is a thriller, a police procedural, and a psychological study of PTSD and workforce burnout. It is a look at serial killers and the impossibility of knowing who will become one and why. But, most of all, The Vanishing Season is a terrific read that you won't be able to put down once you start.”
— Nancy McFarlane, Fiction Addiction, Greenville, SC

"A gripping and powerful read. It is what we call edge-of-your-seat, rollercoaster of a thriller. You will not be able to put it down before you finish it."—The Washington Book Review

Winner of the Minotaur Books/Mystery Writers of America First Crime Novel Competition, Joanna Schaffhausen’s accomplished debut, The Vanishing Season, will grip readers from the opening page to the stunning conclusion.

Ellery Hathaway knows about serial killers, but not through her police training. She's an officer in sleepy Woodbury, MA, where a bicycle theft still makes the newspapers. No one there knows she was once victim number seventeen in the grisly story of serial killer Francis Michael Coben. The only one who lived.

When three people disappear from her town in three years, all around her birthday—the day she was kidnapped so long ago—Ellery fears someone knows her secret. Someone very dangerous. Her superiors dismiss her concerns, but Ellery knows the vanishing season is coming and anyone could be next. She contacts the one man she knows will believe her: the FBI agent who saved her from a killer’s closet all those years ago.

Joanna Schaffhausen wields a mean scalpel, skills developed in her years studying neuroscience. She has a doctorate in psychology, which reflects her long-standing interest in the brain—how it develops and the many ways it can go wrong. Previously, she worked for ABC News, writing for programs such as World News Tonight, Good Morning America, and 20/20. She lives in the Boston area with her husband and daughter. The Vanishing Season is her first novel.