Alexandra Petri's US History: Important American Documents (I Made Up) (Hardcover) 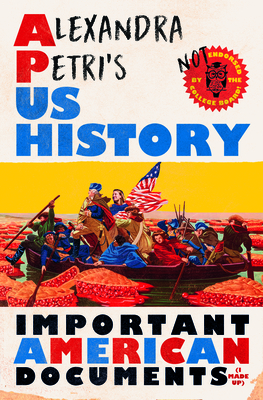 A witty, absurdist satire of the last 500 years, Alexandra Petri’s US History is the fake textbook you never knew you needed!

Alexandra Petri’s US History contains a lost (invented!) history of America. (A history for people disappointed that the only president whose weird sex letters we have is Warren G. Harding.) Petri’s “historical fan fiction” draws on real events and completely absurd fabrications to create a laugh-out-loud, irreverent takedown of our nation’s complicated past.

On Petri’s deranged timeline, John and Abigail Adams try sexting, the March sisters from Little Women are sixty feet tall, and Susan Sontag goes to summer camp. Nearly eighty short, hilarious pieces span centuries of American history and culture. Ayn Rand rewrites The Little Engine That Could. Nikola Tesla’s friends stage an intervention when he falls in love with a pigeon. The characters from Sesame Street invade Normandy. And Mark Twain—who famously said reports of his death had been greatly exaggerated—offers a detailed account of his undeath, in which he becomes a zombie.

This side-splitting work of historical humor shows why Alexandra Petri has been hailed as a “genius,”* a “national treasure,”† and “one of the funniest writers alive”‡.

Alexandra Petri is a humorist and columnist for the Washington Post and author of Alexandra Petri's US History and Nothing Is Wrong and Here Is Why, a Thurber Prize finalist. Her satire has also appeared in McSweeney’s and the New Yorker’s Daily Shouts and Murmurs. She lives in Washington, DC.

Alexandra Petri’s marvelously inventive, wickedly funny, and extremely astute take on US history is exactly what we need as we ponder the future of the American Experiment and begin to prepare for the country’s 250th anniversary.
— Annette Gordon-Reed, New York Times best-selling author of On Juneteenth

I can safely say I will never look at Sesame Street, Emily Dickinson, or John and Abigail Adams’s marriage the same way again.

— Randall Munroe, New York Times best-selling author of What If? and What If? 2

Alexandra Petri’s deranged take on American history captures the spirit of the nation’s past so well, I’m afraid it’s going to be banned in Florida.
— Alexis Coe, New York Times best-selling author of You Never Forget Your First: A Biography of George Washington

A charming, brisk galumph through history. I enjoyed it immensely, as I always do with Alexandra Petri’s ricochet reactions to the historical process.
— Daniel Lavery, author of Something That May Shock and Discredit You and Texts from Jane Eyre