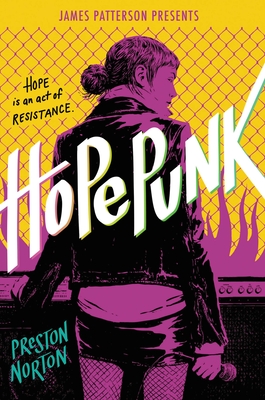 A heartfelt and funny new novel about forgiveness and redemption, and about how hope is the ultimate act of rebellion, perfect for fans of John Green and Becky Albertalli.

Growing up in a conservative Christian household isn’t easy for rock-obsessed Hope Cassidy. She's spent her whole life being told that the devil speaks through Led Zeppelin, but it’s even worse for her sister, Faith, who feels like she can’t be honest about dating the record shop cashier, Mavis. That is, until their youngest sister hears word of their "sinful" utopia and outs Faith to their parents. Now there’s nowhere for Faith to go but the Change Through Grace conversion center…or running away.

Following Faith’s disappearance, their family is suddenly broken. Hope feels a need to rebel. She gets a tattoo and tries singing through the hurt with her Janis Joplin-style voice. But when her long-time crush Danny comes out and is subsequently kicked out of his house, Hope can’t stand by and let history repeat itself. Now living in Faith’s room, Danny and Hope strike up a friendship...and a band. And their music just might be the answer to dethroning Alt-Rite, Danny’s twin brother's new hate-fueled band.

With a hilarious voice and an open heart, Hopepunk is a novel about forgiveness, redemption, and finding your home, and about how hope is the ultimate act of rebellion.

Preston Norton is bisexual, slightly genderqueer, and married. His partner, Erin, is trying to put him on a diet, and he's revolting (both contexts apply). He has taught seventh grade and ninth grade English, mentored drug addicts, and mowed lawns (in no particular order). He is obsessed with 2001: A Space Odyssey and Quentin Tarantino.

*"Hopepunk is perhaps the most foulmouthed, punk rock book to ever be written about religion and forgiveness. It’s stellar. Jam-packed with plot and overflowing with characters who turn from hilarious to downhearted on a dime, it is a wonder that instead of seeming dense and manic, Hopepunk is instead clever and precise."

"[S]harp humor, an infectious love of music, and an encouraging message: with hope, change is always possible."—Publisher's Weekly

Praise for Where I End and You Begin:

“[F]lies by in a stream of fast-paced action and nuanced character development… An entertaining queer romance.”

“Norton’s novel offers thought-provoking ideas about gender, sexuality, and compassion with plenty of comedy along the way.”

“There's character development aplenty in this novel about what it takes to make the world a better place… Funny, well-plotted and sneakily thought-provoking…fans of humorous realistic fiction will find a lot to enjoy in Norton's first foray into the genre.”

Praise for Neanderthal Opens the Door to the Universe:

* “[A] funny and sweetly oddball book. At the story’s core is an unsentimental treatment of a bullied kid and his one-time bully discovering their commonalities. That Norton accomplishes this without moralizing and in inventively rhythmic and pop-culture–saturated language only adds to the fun.”