How to Teach Quantum Physics to Your Dog (Paperback) 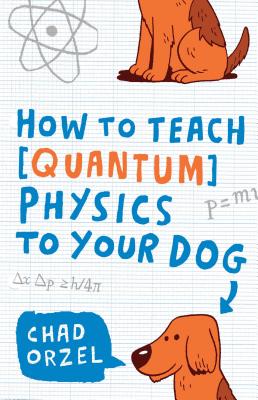 Learn the basics of quantum physics with this clever, fun, and lighthearted introduction to modern physics based on a series of conversations with Chad Orzel and his dog Emmy.

When physics professor Chad Orzel went to the pound to adopt a dog, he never imagined Emmy. She wasn’t just a friendly mutt who needed a home. Soon she was trying to use the strange ideas of quantum mechanics for the really important things in her life: chasing critters, getting treats, and going for walks. She peppered Chad with questions: Could she use quantum tunneling to get through the neighbor’s fence and chase bunnies? What about quantum teleportation to catch squirrels before they climb out of reach? Where are all the universes in which Chad drops steak on the floor?

With great humor and clarity, Chad Orzel explains to Emmy, and to human readers, just what quantum mechanics is and how it works—and why, although you can’t use it to catch squirrels or eat steak, it’s still bizarre, amazing, and important to every dog and human.

Chad Orzel was born and raised in central New York, and received a degree in physics from Williams College, and his Ph.D. in chemical physics from the University of Maryland. He is now a professor in the Department of Physics and Astronomy at Union College in Schenectady, New York. He lives near campus with his wife Kate, their daughter, and, of course, Emmy, the Queen of Niskayuna.

“[D]on't let Orzel's laid back nature or clever sense of humor fool you—he is explaining some pretty serious stuff. A level-headed and confident guide, he takes Emmy (and the reader) through everything from wave-particle duality and superpositions to quantum tunneling and the so-called many worlds interpretation (many worlds, many treats).” –New Scientist

“It's hard to imagine a better way for the mathematically and scientifically challenged, in particular, to grasp basic quantum physics.” –Booklist

“Chad Orzel’s treatment of special and general relativity is comprehensive, informative, and amazingly accessible, yet it’s funny too. This is, by far, the most entertaining discussion of the subject that I’ve ever had the pleasure of reading.” –Steve Nadis, coauthor of The Shape of Inner Space