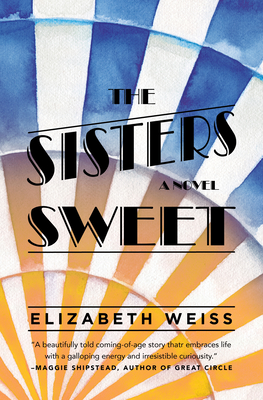 By Elizabeth Weiss
Email or call for price

A young woman in a vaudeville sister act must learn to forge her own path after her twin runs away to Hollywood in this richly immersive debut about love, family, and friendship. "A beautifully told coming-of-age story that embraces life with a galloping energy and irresistible curiosity."--Maggie Shipstead, New York Times bestselling author of Great Circle Leaving was my sister's choice. I would have to make my own. All Harriet Sz sz has ever known is life onstage with her sister, Josie. As "The Sisters Sweet," they pose as conjoined twins in a vaudeville act conceived of by their ambitious parents, who were once themselves theatrical stars. But after Josie exposes the family's fraud and runs away to Hollywood, Harriet must learn to live out of the spotlight--and her sister's shadow. As Josie's star rises in California, the Sz szes fall on hard times. Striving to keep her struggling family afloat, Harriet molds herself into the perfect daughter. She also tentatively forms her first relationships outside her family and begins to imagine a life for herself beyond the role of dutiful daughter that she has played for so long. Finally, Harriet must decide whether to honor her mother, her father, or the self she's only beginning to get to know. Full of long-simmering tensions, buried secrets, questionable saviors, and broken promises, this is a story about how much we are beholden to others and what we owe ourselves. Layered and intimate, The Sisters Sweet heralds the arrival of an accomplished new voice in fiction.

Elizabeth Weiss earned an MFA from the Iowa Writers' Workshop, where she was a Truman Capote Fellow. Her nonfiction has been published in The New Yorker online. She has taught for the University of Iowa, the Iowa Young Writers' Studio, and the Sackett Street Writers' Workshop, and is a mentor for the Minnesota Prison Writing Workshop. She lives in Minneapolis with her spouse, daughter, and dog.