Before Boas: The Genesis of Ethnography and Ethnology in the German Enlightenment (Critical Studies in the History of Anthropology) (Paperback) 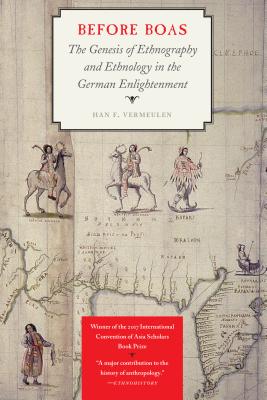 The history of anthropology has been written from multiple viewpoints, often from perspectives of gender, nationality, theory, or politics. Before Boas delves deeper into issues concerning anthropology’s academic origins to present a groundbreaking study that reveals how ethnography and ethnology originated during the eighteenth rather than the nineteenth century, developing parallel to anthropology, or the “natural history of man.”

Han F. Vermeulen explores primary and secondary sources from Russia, Germany, Austria, the United States, the Netherlands, Hungary, the Czech Republic, Slovakia, France, and Great Britain in tracing how “ethnography” originated as field research by German-speaking historians and naturalists in Siberia (Russia) during the 1730s and 1740s, was generalized as “ethnology” by scholars in Göttingen (Germany) and Vienna (Austria) during the 1770s and 1780s, and was subsequently adopted by researchers in other countries.

Before Boas argues that anthropology and ethnology were separate sciences during the Age of Reason, studying racial and ethnic diversity, respectively. Ethnography and ethnology focused not on “other” cultures but on all peoples of all eras. Following G. W. Leibniz, researchers in these fields categorized peoples primarily according to their languages. Franz Boas professionalized the holistic study of anthropology from the 1880s into the twentieth century.

Han F. Vermeulen is an alumnus of Leiden University, the Netherlands, and a research associate at the Max Planck Institute for Social Anthropology in Halle (Saale), Germany.

"A short review cannot do justice to the sophistication of the author's comprehensive and remarkable research, which departs from histories that view the origins of anthropology in classical Greece or Renaissance exploration."—Riva Berleant-Schiller, Choice

"This important book rewrites the early history of anthropology in new and surprising ways."—James Urry, Australian Journal of Anthropology

"Before Boas represents a major contribution to the history of anthropology that must be taken into serious consideration by every scholar in our field."—Sergei A. Kan, Ethnohistory

"Deserving to be called a sensation."—Horst Bredekamp, Süddeutsche Zeitung

"This is a unique and detailed study of the eighteenth century origins of ethnology or ethnography that offers a new insight in reexamining the scope and subject matter of these disciplines in their earlier stages."—Madhuvanti Karyekar, Museum Anthropology Review

<“This important book introduces the scholarship that underlies the development of modern ethnography and ethnology, especially that of Franz Boas. With exhaustive research Han Vermeulen demonstrates the significance of the German Enlightenment, the ethnolinguistics of Leibniz, and the ethnography of those inspired by Leibniz who undertook scientific descriptions of the peoples of Siberia.”—Herbert S. Lewis, author of In Defense of Anthropology: An Investigation of the Critique of Anthropology