The Hoax: A Memoir (Paperback) 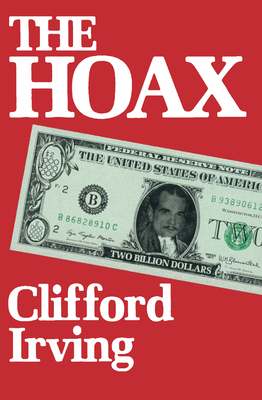 By Clifford Irving
$21.99
Usually ships in 7-10 days. Or you can try to purchase at bookshop.org/shop/nowherebookshop

The ultimate caper story, novelist Clifford Irving's no-holds-barred account of the literary hoax that stunned the publishing world, is the story of his faked "autobiography" of Howard Hughes. HOAX was first published in Great Britain in 1997, where it became a bestseller. But no American hardcover house would touch THE HOAX until now. One major publisher offered a $500,000 advance when the book was nearing completion, drew up the contract...then abruptly bowed out. Why? The answer is implicit in this classic tale of daring, treachery, and corruption. As fast-paced and exciting as any spy novel, it involves the reader at every devilish twist and turn. Clifford Irving tells how the hoax developed, like a Chinese puzzle, from its madcap beginning to the final startling confession--a witty and nail-biting story of international intrigue and beautiful women, of powerful corporate executives and jet-set rogues, of cover-ups and headlines. Clifford Irving, his wife Edith, and his collaborator, Richard Suskind, went to prison for their efforts. But, as the author himself writes: ""...beyond all the naivete and stupidity, beyond the vulgarity inherent in the amount of money involved--beyond all this a certain grandeur had rooted itself in the scheme, and I could still spy a reckless and artistic splendor to the way we had carried it out.

Clifford Irving (1930-2017) was the author of twenty books and the perpetrator of "one of the biggest literary hoaxes of the 20th century" (The New York Times). Born in Manhattan, Irving graduated from Cornell University and traveled widely before taking up residence on the Spanish island of Ibiza. He published three novels and a biography of Hungarian art forger Elmyr de Hory before launching, in 1970, a scheme to write a fake autobiography of the billionaire recluse Howard Hughes. Irving forged letters, made phone calls from exotic locations where he claimed to be meeting with Hughes, and duped CBS News correspondent Mike Wallace in an interview on 60 Minutes. After Hughes emerged from seclusion to say that he had never met Irving, the scheme fell apart. In 1972, Irving pled guilty to conspiracy to defraud and served sixteen months in federal prison. He documented the escapade and its aftermath in The Hoax (1981). His other books include Tom Mix and Pancho Villa (1982), The Angel of Zin (1984), Daddy's Girl: The Campbell Murder Case (1988), Trial (1990), and Final Argument (1993).