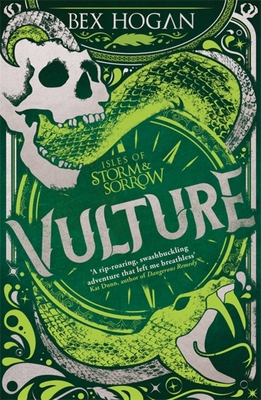 Power, politics and pirates collide in Vulture, the finale of the epic YA fantasy series The Isles of Storm and Sorrow, perfect for fans of Pirates of the Caribbean.

We are all one misstep away from being the villain...

Marianne has passed the ultimate test required to be a Mage. She is finally powerful enough to reunite the Twelve Isles.

But having exposed herself to the darker side of magic, Marianne is struggling. The magic within her is nearly impossible to control, and she becomes cruel and violent, mercilessly pursuing those who have harmed her in the past, ignoring the pleas of those closest to her to remember what's really important: saving the islands.

Everything she's fought for has come down to this. Will Marianne be able to fulfil her promise to bring peace to the islands when she can't even bring peace to herself?

Conquer the darkness. Control the magic. Save the Isles.

Raised on a healthy diet of fantasy and fairy tales, Bex Hogan has spent much of her life lost in daydreams. Initially she wanted to train as an actress, but quickly realised her heart belonged to storytelling rather than performing, and soon after started creating stories of her own. A Cornish girl at heart, Bex now resides in Cambridgeshire with her family.