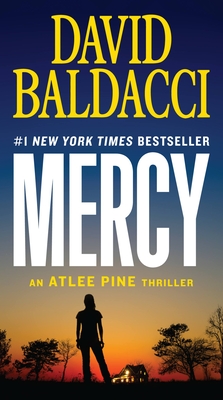 This is book number 4 in the An Atlee Pine Thriller series.

For her entire life, FBI agent Atlee Pine has been searching for her twin sister, Mercy, who was abducted at the age of six and never seen again. Mercy’s disappearance left behind a damaged family that later shattered beyond repair when Atlee’s parents inexplicably abandoned her.

Now, after a perilous investigation that nearly proved fatal, Atlee has finally discovered not only the reason behind her parents’ abandonment and Mercy’s kidnapping, but also the most promising breakthrough yet: proof that Mercy survived her abduction and then escaped her captors many years ago.

Though Atlee is tantalizingly close to her family at last, the final leg of her long road to Mercy will be the most treacherous yet. Mercy left at least one dead body behind before fleeing her captors years before. Atlee has no idea if her sister is still alive, and if so, how she has been surviving all this time. When the truth is finally revealed, Atlee Pine will face the greatest danger yet, and it may well cost her everything.

DAVID BALDACCI is a global #1 bestselling author, and one of the world's favorite storytellers. His books are published in over forty-five languages and in more than eighty countries, with 150 million copies sold worldwide. His works have been adapted for both feature film and television. David Baldacci is also the cofounder, along with his wife, of the Wish You Well Foundation, a nonprofit organization dedicated to supporting literacy efforts across America. Still a resident of his native Virginia, he invites you to visit him at DavidBaldacci.com and his foundation at WishYouWellFoundation.org.

"Mercy is classic David Baldacci. It’s full of heart and great thrills, with an intricate plot that only he can conceive."—BookReporter.com

"Dips deeper into the dark world of noir, resonating at times as neo-gothic. This is Baldacci at his best, probing well beneath the surface of the story to create a thriller as richly drawn as it is wondrously realized."—BookTrib.com

"Baldacci at his best."—Florida Times-Union

"It's just too good . . . There's more than one case to be solved in this complex novel about very interesting women. One of Baldacci's best." —The Globe and Mail

"With an interesting storyline, amazing characters, and packed with action, fans are sure to love Mercy."—Seattle Book Review

"Atlee Pine fans will want to get their hands on this one.” —The Mystery Site