Murder by Milkshake: An Astonishing True Story of Adultery, Arsenic, and a Charismatic Killer (Paperback) 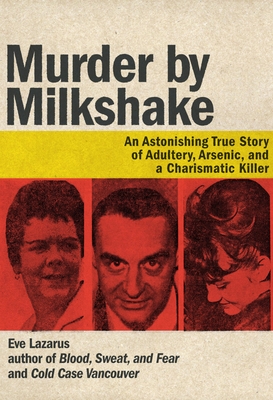 When forty-year-old Esther Castellani died a slow and agonizing death in 1965, the official cause was at first undetermined. The day after Esther's funeral, her husband, Rene, packed up his girlfriend, Lolly; his daughter, Jeannine; and Lolly's son, Don, in the company car and took off for Disneyland. If not for the doggedness of the doctor who treated Esther, Rene, then a charismatic and handsome radio personality, would have been free to marry Lolly, who was the station's pretty twentysomething receptionist. Instead, Rene was charged with capital murder for poisoning his wife with arsenic-laced milkshakes.
Murder by Milkshake is the compelling story of the Castellanis, and of their daughter, Jeannine, who was eleven at the time of her mother's murder and who clung to her father's innocence, even committing perjury during his trial. Rigorously researched, and based on dozens of interviews with family, friends, and co-workers, Murder by Milkshake documents the sensational case that kept a city spellbound, while providing a snapshot of the Mad Men-esque social and political realities of the 1960s.

Eve Lazarus is a journalist, crime historian, and author. Her passion for non-traditional history and a fascination with murder has led to six books of non-fiction, including Blood, Sweat, and Fear: The Story of Inspector Vance, Vancouver's First Forensic Investigator and Cold Case Vancouver: The City's Most Baffling Unsolved Murders.