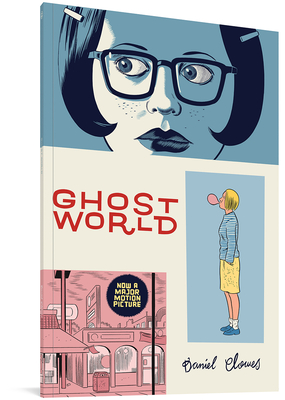 1998 Ignatz Award Winner, Outstanding Graphic Novel: The inspiration for the feature film and one of the most acclaimed graphic novels ever.

Ghost World has become a cultural and generational touchstone, and continues to enthrall and inspire readers over a decade after its original release as a graphic novel. Originally serialized in the pages of the seminal comic book Eightball throughout the mid-1990s, this quasi-autobiographical story (the name of one of the protagonists is famously an anagram of the author's name) follows the adventures of two teenage girls, Enid and Becky, two best friends facing the prospect of growing up, and more importantly, apart. Daniel Clowes is one of the most respected cartoonists of his generation, and Ghost World is his magnum opus. Adapted into a major motion picture directed by Terry Zwigoff (director of the acclaimed documentary Crumb), which was nominated for an Academy Award for Best Adapted Screenplay. This graphic novel is a must for any self-respecting comics fan's library.

Daniel Clowes (b. 1961, Chicago, Illinois) is an American cartoonist. He is a multi-Harvey, Eisner, and Ignatz Award Winner, and his papers have been acquired by the University of Chicago library. His most recent book, Patience, has been translated into nineteen languages, and his books and comics have won numerous awards, including a PEN America Literary Award and over a dozen Harvey and Eisner Awards. As a screenwriter, he has been nominated for an Academy Award and written the films Ghost World (with Terry Zwigoff), Art School Confidential, and Wilson. A retrospective of his work, Modern Cartoonist, debuted in 2012, appearing at the Museum of Contemporary Art in Chicago, the Oakland Museum, and the Wexner Center. His illustrations have been featured on a wide-ranging array of posters, album covers, and magazines, including many covers for The New Yorker. He lives in Oakland, California, with his wife and son.

Ghost World gets better every time I read it, and I’ve read it hundreds of times. It still frightens me a little how well Daniel Clowes managed to nail the teen-girl brain.

[Clowes] spells out the realities of teen angst as powerfully and authentically as Salinger did in The Catcher in the Rye for an eariler generation.

The most readable comic of the year.
— Time

The appeal of Daniel Clowes’ breakout graphic novel lies not from what could be predictable plotting, but from its engaging character work. It is the relationship between outsider teens Enid and Rebecca that holds readers in its hilariously cynical sway from panel one.
— Wizard