Elements: A Visual Exploration of Every Known Atom in the Universe (Hardcover) 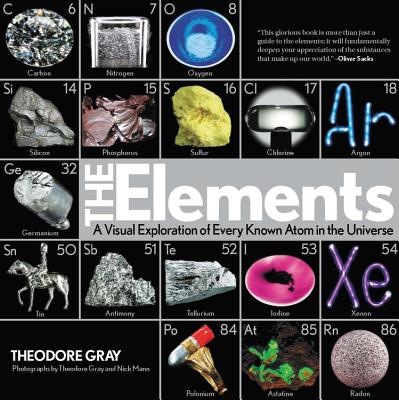 With more than 1 million copies sold worldwide, The Elements is the most entertaining, comprehensive, and visually arresting book on all 118 elements in the periodic table.

Includes a poster of Theodore Gray's iconic photographic periodic table of the elements!

Based on seven years of research and photography by Theodore Gray and Nick Mann, The Elements presents the most complete and visually arresting representation available to the naked eye of every atom in the universe. Organized sequentially by atomic number, every element is represented by a big beautiful photograph that most closely represents it in its purest form. Several additional photographs show each element in slightly altered forms or as used in various practical ways. Also included are fascinating stories of the elements, as well as data on the properties of each, including atomic number, atomic symbol, atomic weight, density, atomic radius, as well as scales for electron filling order, state of matter, and an atomic emission spectrum.

This of solid science and stunning artistic photographs is the perfect gift book for every sentient creature in the universe.

Theodore Gray is the author of The Elements, Molecules, and Reactions, as well as Theodore Gray's Completely Mad Science. He is the creator of the bestselling iPad apps "Elements" and "Molecules," which have both been named "App of the Week" by Apple and was Director of "Disney Animated" (also honored by Apple as "iPad App of the Year"). Gray appeared on stage with Steve Jobs several times in his capacity as a software creator. He also co-founded Wolfram Research, Inc., makers of the widely-used software Mathematica and the Wolfram Alpha website. He lives in Urbana, Illinois.

Nick Mann is a photographer specializing in taking beautiful photos of inanimate objects on black backgrounds. His other work includes Molecules,, Reactions, and How Things Work. Originally of Urbana, IL, he lives in Champaign, IL and North Liberty, IA, where he is working towards a geology degree at Cornell College.

Praise for The Elements:

"I don't know if this is the first coffee-table book paying lush photographic homage to the periodic table, but it is certainly the most gorgeous one I've seen." —John Tierney, The New York Times

"The Elements is a loving reimagination of the classic table." —Wired

"A great mix of science and art." —Discover