Ranch Gates of the Southwest (Hardcover) 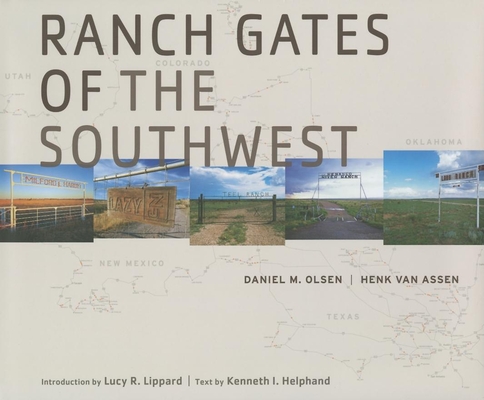 In Ranch Gates of the Southwest, Daniel Olsen and Henk van Assen present more than 100 full-color photographs of ranch gates taken across Colorado, Utah, Nevada, Texas, Oklahoma, New Mexico, and Arizona. From rugged and functional to stylized and adorned, ranches with names such as F. V. Cuahope Ranch, High Lonesome, Felix River Ranch, and Rancho Quatro Hermanas reveal cultural history, landscape features, and individualism through language and design. Lucy R. Lippard's introduction offers historical and cultural context of ranches and their gates. Landscape architecture professor Kenneth I. Helphand explains the environmental history of ranches from land appropriation and naming to the impact of gates on the landscape. In their own essays, Olsen and van Assen tell the behind-the-scenes story of making the book and describe type design and language from their perspectives as designers and photographers. Ranch Gates of the Southwestis both a sumptuous documentary record and a tribute to a quintessentially American symbol.

Henk van Assen's New York-based studio, HvADesign, focuses on book design and environmental graphics. He received his training in graphic design in his home country of the Netherlands from the Royal Academy of Fine Arts, The Hague. After working for several years as a graphic designer in Amsterdam, he came to the United States and earned an M.F.A. from Yale University. Since 1999 van Assen has been a critic at the Yale University School of Art, and from 2003 to 2008 he was director of undergraduate studies. He has also taught at the University of Texas, the School of Visual Arts in New York, and the University of the Arts in Philadelphia. His work has won many awards, including the 1999, 2000, 2004, and 2005 American Institute of Graphic Arts 50 Best Books Awards.