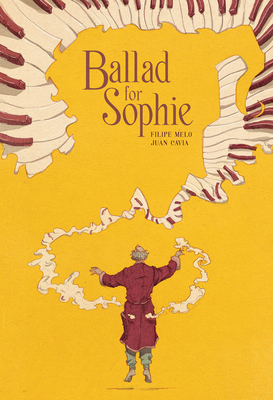 A young journalist prompts a reclusive piano superstar to open up, resulting in this stunning graphic sonata exploring a lifetime of rivalry, regret, and redemption.

1933. In the small French village of Cressy-la-Valoise, a local piano contest brings together two brilliant young players: Julien Dubois, the privileged heir of a wealthy family, and François Samson, the janitor's son. One wins, one loses, and both are changed forever.

1997. In a huge mansion stained with cigarette smoke and memories, a bitter old man is shaken by the unexpected visit of an interviewer. Somewhere between reality and fantasy, Julien composes, like in a musical score, a complex and moving story about the cost of success, rivalry, redemption, and flying pianos.

When all is said and done, did anyone ever truly win? And is there any music left to play?

Filipe Melo is a musician, film director and author. He developed a passion for piano and improvisation from an early age. He studied at Hot Clube de Portugal and later at Berklee College of Music. After many years as a pianist, he also became a composer and an orchestrator. He currently teaches music at ESML, a university in Lisbon. In cinema, he developed several cult projects: I'll See You in My Dreams, Um Mundo Catita and Sleepwalk, as well as commercials and music videos. His books are published in several countries. In the US, he wrote for the Eisner-winning anthology Dark Horse Presents. In 2019, he received a career award from the Amadora BD Festival.

Juan Cavia works as an art director and illustrator since 2004. He studied cinema and simultaneously developed skills in illustration and painting from an early age with his mentor, Argentinean artist Carlos Pedrazzini. At the age of 21, he began a career as an art director. Since then, he has made advertisements, TV, music videos, theater and nine feature films, including The Secret in her Eyes by J. Campanella (Oscar-winner for Best Foreign Film).

"Breathtakingly beautiful... One of the most self-assured and satisfying books of the year, gloriously drawn and colored, full of twists and turns, authentic emotion and peak craftsmanship." — Forbes

"Ballad for Sophie was the perfect balance of story and art that is a rare find indeed." —Biff Bam Pop

"In Ballad for Sophie, an interview turns into a life story, full of drama and doubt, regret and hope. This stunning collaboration between Filipe Melo and Juan Cavia will sweep you off your feet and surprise you with its unexpected ending."
—Christy Peterson, Vintage Books, Vancouver, WA